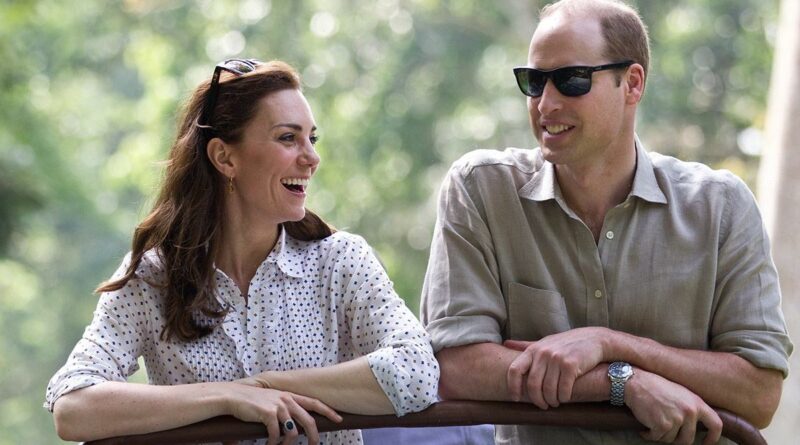 While Prince Harry and Meghan Markle are openly affectionate in public – something that has historically been an unspoken no-no when it comes to royal protocol – there have been fewer moments when Prince William and Kate have indulged in a bit of PDA.

Since the Cambridges’ public displays of affection are clearly more limited, lots of people have asked: ‘Do William and Kate ever hold hands in public?’ Yes, they do!

There have been plenty of sweet moments between the couple captured on camera, including a number of gorgeous black and white images of the couple taken backstage by royal photographer Chris Jackson at the Earthshot Prize Awards in October 2021.

In December 2020, during their royal train tour of the UK, William was spotted gently touching his wife’s back as they toasted marshmallows together at a Christmas market stall at Cardiff Castle.

In August 2020, the Duchess was spotted putting her arm affectionately around her husband as they enjoyed a giggle while playing in the amusement arcades on Barry Island.

William and Kate were spotted gazing into one another's eyes as they walked down the pier at The Mumbles in South Wales in February 2020. It was just a couple of weeks before Valentine's Day and the Duchess even wore a heart-printed Beulah London scarf for the occasion.

William had his arm subtly tucked behind his wife's waist during their visit to Blackpool in March 2009. They were also spotted holding hands walking across the lawn at Kensington Palace to board a helicopter on the way to their engagement.

William and Kate were caught sharing a sweet moment during a walkabout in Leicester in October 2018. The couple were seen holding hands and laughing as they chatted to locals, while Kate shot her husband loving glances.

In December 2017, the Duke and Duchess of Cambridge arrived hand-in-hand at the traditional Christmas church service in Sandringham. They joined Prince Harry and Meghan for the highly anticipated arrival, which marked the former actress' first time joining the royal family for the annual occasion.

Kate placed her hand on Prince William's lower back as they made their way through the crowd at the 2017 Royal Ascot.

Prince William and Kate's togetherness was discreetly on show as the Duchess placed her hand on her husband's leg at an official welcoming ceremony on day one of their 2016 royal tour of Canada. Photo: Karwai Tang/WireImage

Before all eyes were on bride Princess Eugenie and her handsome groom Jack Brooksbank, Prince William and Kate held hands in a very rare public display of affection.

MORE: Royal teens! 11 best photos of princes and princesses in their younger years

During the men's final at Wimbledon, Kate gently stroked her husband's cheek as they watched Roger Federer's match from the royal box. Photo: Getty Images

Just a month before welcoming their third child together, Prince Louis, Prince William made sure his heavily-pregnant wife was well cared for.

The royals enjoyed a cuddle on Prince Edward Island, after taking part in a dragon boat race at Dalvay-By-the-Sea during their 2011 royal tour of Canada.

The British royals sweetly clasped hands as they attentively watched a swimming competition at the Tollcross Swimming Centre during the 2014 Commonwealth Games in Glasgow, Scotland.

Prince George, Princess Charlotte and Prince Louis' parents shared a rare, public kiss in Santa Barbara, California during their 2012 visit to the US. Kate congratulated her husband with a peck on the cheek after he played in the Audi Polo Challenge. Photo: Bauer-Griffin/GC Images

The Duchess blew her husband a kiss as she watched William compete in the 2014 Jerudong Trophy charity polo match held at the Cirencester Park Polo Club.

The Duke could not contain his excitement at the London 2012 Summer Games as he celebrated a win, hugging his wife in the stands.

William's got Kate's back! The Duke of Cambridge sweetly held his wife during a 2014 visit to a Yorkshire village celebrating the Stage 1 route of the Tour de France. Photo: Anwar Hussein/WireImage

The kiss seen around the world! The newly-minted Duke and Duchess of Cambridge sealed their marriage with a public kiss on the balcony of Buckingham Palace, following their 2011 royal wedding. Photo: James Devaney/FilmMagic

The newlyweds strolled the grounds of Buckingham Palace hand-in-hand one day after their highly anticipated royal wedding, before jetting off on their honeymoon.

The royal couple kept close with Kate's arm on her husband as they watched a performance from the Bella Bella First Nations Community at Wawiska Community Hall in Canada in 2016. Photo: Pool/Sam Hussein/WireImage

Prince William held on to Kate (and his own leg!) after he beat her and his brother Harry in a relay race during the Team Heads Together training day in London in February 2017. Photo: Karwai Tang/WireImage

The couple held hands as they attended the Secretary of State's annual Garden party at Hillsborough Castle in June 2016 in Belfast, Northern Ireland.

The stylish royal let out a laugh as she held onto her husband while listening to a children's story time at Canada's MacBride Museum of Yukon History in 2016.