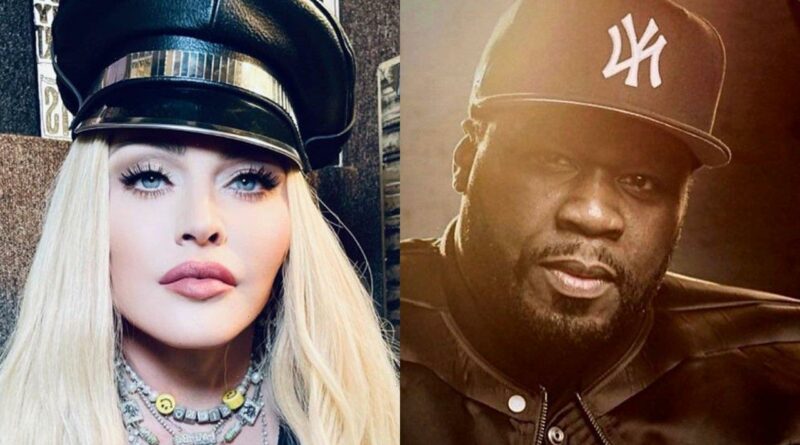 Shortly after the ‘Material Girl’ songstress shares new explicit bedroom snapshots on her social media account, the ‘In Da Club’ rapper mocks her for trying to be ‘like a virgin at 63.’

AceShowbiz –50 Cent has responded to Madonna‘s new explicit bedroom photos. The “In Da Club” rapper dubbed the “Material Girl” songstress’ snaps that saw her freeing her nipple and spreading her legs “funniest s**t.”

“[Eyeball emoji] yo this is the funniest s**t LOL [laughing emoji],” the 46-year-old rapper wrote via Instagram alongside a screenshot of Madonna’s saucy post. He added, “That’s Madonna under the bed trying to do like a virgin at 63. she shot out, if she don’t get her old a** up. LMFAO [crying laughing emojis].”

Madonna shared the sexy photos on Wednesday, November 24 on her Instagram account. In the pictures, the 63-year-old star could be seen lying in bed while wearing fishnet stockings, thong underwear and a very racy black bra.

In the first snap, Madonna wore only fishnet stockings, a black thong and heels as her breasts hung out with her nipples on full display. She wore her blond hair down and straight with a full face of makeup.

Following snaps caught Madonna hanging on a railing at the end of the bed and posing with the metal in her mouth. In the fourth photo, the singer posed on her back with her nipple fully out, followed by an image of her resting on her side in the same revealing ensemble. In another picture, she knelt on the ground, which gave fans a clear look at her booty through the fishnet tights.

Madonna continued to strip down for the photo shoot, as she laid under the covers completely naked with a red heart emoji placed over her nipple. She captioned her post, “Angel watching over Me.”

Many Instagram users criticized her for sharing the NSFW photos in the comment section of the post. One wrote, “Please stop this pornographic ridiculousness.” Another added, “Honey I think the angel flew off long time ago.”

Her revealing snapshots came after fans dubbed her “gross” for recreating Marilyn Monroe‘s death for a V Magazine photo shoot in October. At that time, the “Papa Don’t Preach” hitmaker was called out for her insensitive and “inappropriate” saucy photos.

The cover photo saw Madonna laying face down on a mattress, exposing her bottom. Meanwhile, in another shot, the “Like A Virgin” artist covered her body with a white fluffy coat. Some prescription pill bottles could also be seen on her nightstand as Marilyn’s death was ruled a “probable suicide” after she was found dead at her home.

Shortly after the photos were released, many social media critics took issue with the photos, accusing Madonna of “glamorizing” Marilyn’s suicide. “For some morbid and eerie reason, Madonna decides to re-create Marilyn Monroe’s death bed,” wrote one, with another responding, “Yuck. Gross and inappropriate.”