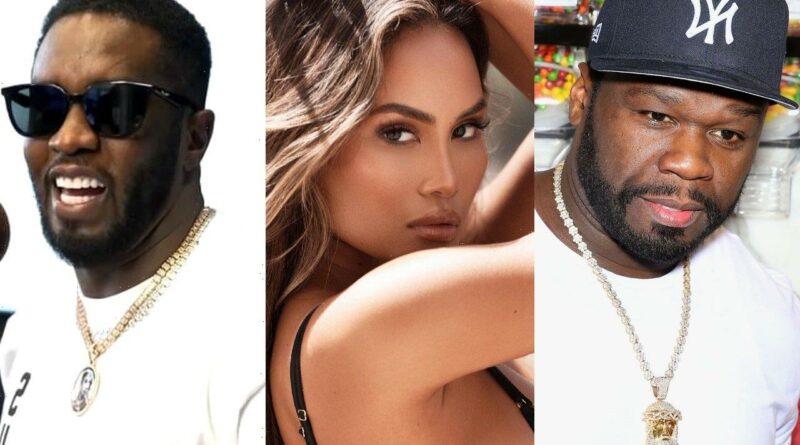 The Philippines-born model is upset at the ‘In da Club’ rapper, with whom she shares a 10-year-old son, for mocking her after rumors spread that she may be dating the Bad Boy Records founder.

AceShowbiz –50 Cent has seemingly picked the wrong person to troll online. The rapper/TV producer has weighed in on rumors that his ex and baby mama Daphne Joy is possibly seeing Sean “P. Diddy” Combs, but she has quickly fired back.

Rumors spread that Daphne could be dating Diddy after social media users noticed that they were at the same event, though they were not seen together. Further fueling the reports, both the model and the hip-hop mogul have posted pictures of them seemingly on the same private jet.

As Internet sleuths have been putting the pieces together, 50 Cent reacted to the dating rumors. Roasting his ex, he posted a picture of him and son Sire Jackson, whom he shares with Daphne, and wrote in the caption, “Oh s**t, that’s your mommy over there with Puffy. LOL. Remeber [sic] what I told you the other day, these b***hes be crazy. SMH.”

Daphne didn’t take Fiddy’s jab at her lightly. Clapping back, she responded in the comment of his Instagram post, “Please stop doing this to me. I never bother you and I’m an outstanding mother to our son. Can we please just focus on that. Please.”

Daphne further vented her frustration over public’s reactions to the dating rumors via her own Instagram page. On Monday, September 26, she wrote a lengthy statement which read, “I hate speaking about my private life on social media. But I feel it needs to be addressed, I’m so tired of my narrative being what it is.”

Explaining her past romantic relationship with Fiddy, she shared, “I was in a 2 year relationship 10+ years ago and out of the relationship God blessed me with a beautiful healthy baby boy. Although my child’s father and I parted ways, I shifted my focus on my sons well being emotionally, spiritually, and everything in between. I’ve healed privately, matured, have been closer to God then ever before and really appreciating this life.”

“I just want to be happy and be left alone,” the Philippines-born model added. “We’re all human and you never know where life can take you. I value and cherish anyone I bring into my life and when I finally show a glimpse of my happiness, I feel I’m attacked for on it.”

Shutting down the naysayers, she concluded her post, “I’m so tired of defending my character, being pre judged and constantly being Villainized. I’m not doing anything wrong and wish no ill to anyone. I just want to be happy. Thank you and God Bless.”

50 Cent has not responded to Daphne’s plea to keep her name out of his mouth, but he seemingly doesn’t feel any guilt for posting about her. His diss at her dating rumors with Diddy is still up on his Instagram feed despite her clapback.