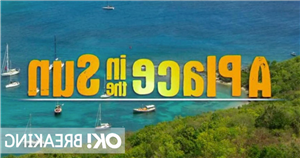 Scarlette Douglas has landed in Australia ahead of this year's I'm A Celebrity… Get Me Out Of Here! kicking off very soon.

The A Place In The Sun star, 35, was seen touching down at Brisbane Airport on Friday 28 October.

Scarlette, who quit the Channel 4 series in August, beamed as she she made her way through the airport.

It comes as Mike Tindall landed in Australia in the early hours of Friday morning UK time.

According to MailOnline, Mike, 44, who is the ITV show's first-ever Royal contestant, is rumoured to have been paid up to £150,000 for his jungle debut. OK! has contacted ITV for comment.

Speaking for the first time about signing up, Mike, who is married to the late Queen's granddaughter Zara Tindall, told reporters: "It should be good fun, why not? It is always worth a go isn't it."

And Australia is a special place for Mike and Zara, who married in 2011, as it is where they met. The couple have three children Mia, eight, Lena, four, and one-year-old Lucas.

Mike said: "Australia is a special place, yeah, I met Zara in Sydney. There is no holiday planned at the moment afterwards. If there was I wouldn't tell you either!"

This year's campmates' arrival come shortly after the I'm A Celeb set was forced to close for 24 hours as a result of Australia's storms.

A spokeswoman for ITV told the PA news agency: "We closed site for 24 hours as a precautionary measure due to the inclement weather."

It is not the first time production of the show has been marred by adverse conditions, with the previous series, filmed at Gwrych Castle in North Wales, hampered by Storm Arwen.