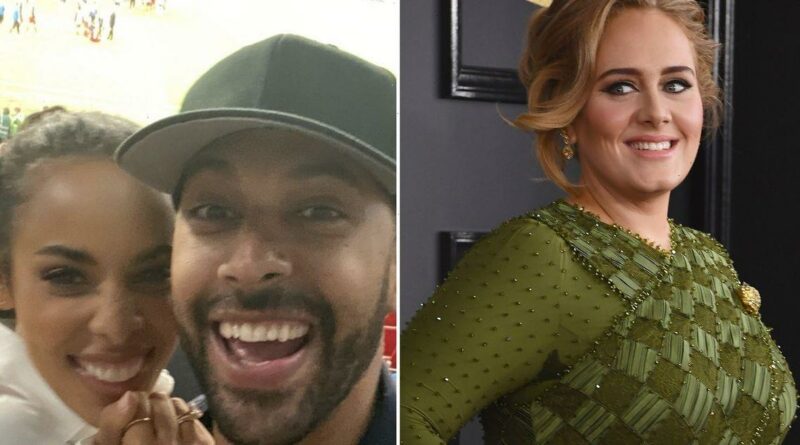 England beat Denmark with a score of 2-1, thanks to a goal from Harry Kane in extra time scored just seconds after a missed penalty.

Whilst Prince William and Prime Minister Boris Johnson were celebrating from the stands at Wembley Stadium, a number of famous faces were instead marking the historic moment at home.

Singer Adele took to Instagram to film the moment Harry, 27, missed the penalty and then scored with the rebound, screaming as the ball hit the back of the net.

In the video, posted to her 39.2million followers, the 33 year old singer is heard repeating: "Come on, come on, come on," as the Tottenham forward runs towards the ball.

Watching Denmark's Kasper Schmeichel catch the ball, Adele lets out a frustrated scream, followed by: "Oh no!" as the camera pans to the floor.

But just before Adele stops filming, the rebound goal is scored, eliciting screams from the Hello singer as she begins to jump and run around her house, loudly shouting: "Oh my God, oh my God!"

She excitedly captioned the video: "ITS BLOODY COMING HOME" alongside a number of England flags.

Whilst many of her fans echoed her excitement, some of her Italian followers teasingly reminded her they still had their home country to beat.

England will face Italy in the final of the tournament on Sunday, once again playing at Wembley Stadium.

Robbie Williams was another famous Brit singer celebrating the victory, with his wife Ayda Field sharing a snap of the newly bald star holding up his fists and screaming with excitement.

Former X Factor judge Ayda wrote to her 615,000 Instagram followers: "The exact moment when @robbiewilliams realised, that for first time in his entire life, football is coming home."

Rochelle and Marvin Humes were lucky enough to be celebrating from the stands, with the former The Saturdays singer filming the moment Harry scored.

The camera flips to see her jumping up and down on and hugging husband Marvin as the crowd erupts.

She later posted snaps of her and Marvin, writing: "What a night… Well done boys."