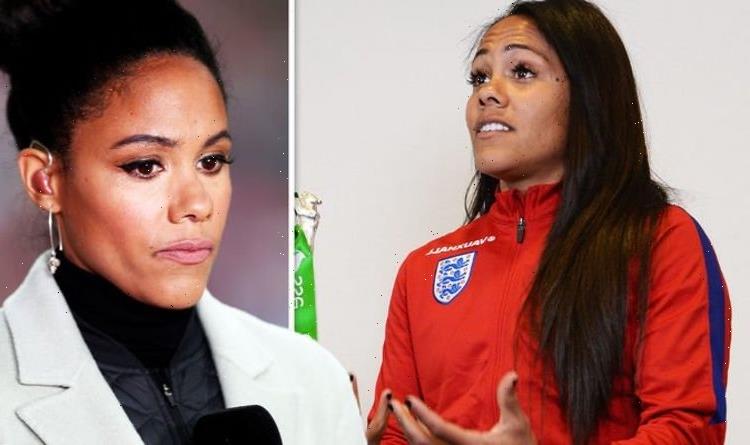 Football Focus presenter Alex Scott has opened up about sustaining a serious injury that led to a shocking diagnosis of osteoarthritis when she was 26-years-old. The former Arsenal player, 36, told Express.co.uk exclusively about the life-changing moment, which stemmed from her being tackled by a teammate during an informal training session.

Alex, who recently took over hosting duties on BBC’s Football Focus after Dan Walker’s exit, told how she sustained the injury.

She said: “In America we trained as we played, so everything was quick and tackles were often hard.

“One of my team put in a slide-tackle on me and rolled my ankle. As soon as it happened, I knew it was a serious injury.

“My biggest fear at the time was, ‘Will I be able to play in the World Cup?'” she added.

“I was in chronic pain and now you’re sitting there telling me I have osteoarthritis?” she said.

“Arthritis? I’m in my twenties – I haven’t got arthritis!” Alex shared, as she recalled her disbelief at the time.

Coming to terms with her diagnosis, she explained: “You have an image of that, you don’t think about long term, it’s like this big, fancy word, ‘osteoarthritis’. I’m like, ‘OK, how do I get onto the pitch on Sunday? Just tell me that.'”

“I’ve now got to live with this problem and manage it for the rest of my career.

“And not only my career, what’s after my career – my life.

Speaking about learning to manage the joint condition, the star told how she wasn’t going to quit her sporting career following the shock diagnosis.

She said: “I was determined to keep playing, and did. You find ways to manage the pain, you know what works for you and what doesn’t.

“The teams I played for during the rest of my playing career and the amazing medical teams I worked with always ensured my training was tailored to manage the condition and the pain during the week, so I was ready to play in matches,” she added.

Following her stint at Boston Breakers, Alex returned to Arsenal for a third spell and went on to represent England in the 2015 FIFA Women’s World Cup.

The former athlete went on to add that her diagnosis of osteoarthritis had nothing to do with her decision to retire in 2017, explaining that she wanted to start a new chapter of her sporting career.

Alex said: “My decision to retire came down to me feeling like the time was right to try something new.

“I knew I wanted to go into broadcasting and was keen to start that next chapter.”

Since retiring, Alex’s venture into a broadcasting and TV career has gone from strength to strength.

Earlier this year, she also presented the Tokyo 2020 Olympic games from the BBC’s media centre in Salford, alongside Clare Balding.