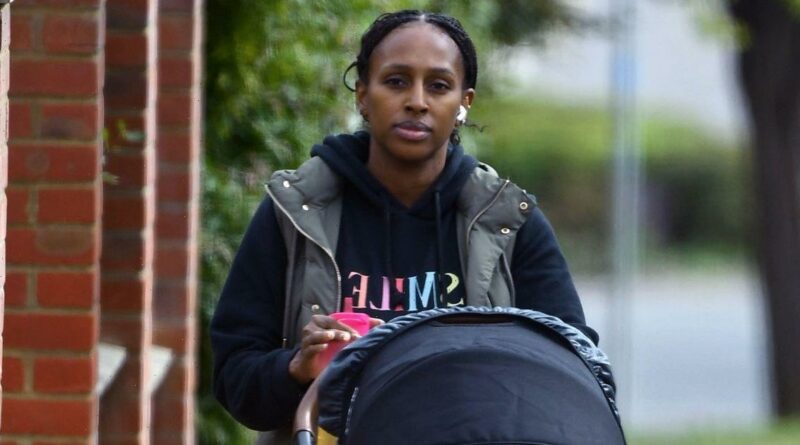 She welcomed her first child back in July, and now Alexandra Burke has been spotted on an Autumn walk with her bundle of joy.

The 34 year old has clearly settled into life as a mum and was snapped on a sweet outing with her little one as she pushed a pram.

The X Factor star dressed casually in a navy blue hoodie with the words ‘Smile’ printed on it and a long khaki gilet.

This comes after the singer, who shares her four month old with her footballer boyfriend Darren Randolph, revealed why she is keeping her baby’s name and gender secret.

Speaking on Loose Women last month, Alexandra broke down as she explained the reasons behind her decision.

Host Ruth Langsford, 62, asked: "You've haven't revealed the name or the gender of the baby, tell people why?"

Alexandra took a deep breath and said: "I've never really spoken about this but obviously I come from X Factor and that's a public show and I'm very grateful for the platform, it's made me who I am today."

The star continued with her voice cracking: "I hate getting emotional talking about this but I asked for all this, my family never."

She then had to take a pause as the Loose Women panel comforted her before she continued and said: "The impact on them is hard. And I want to protect the baby as much as I can."

Alexandra and West Ham star Darren, 35, welcomed their first child in July and the new mum was also quick to tell the Loose Women what a positive experience motherhood has been for her so far.

She said: "Oh gosh, how life has changed. Sleep is a thing of the past. It's changed in a brilliant way. I've never known love like this before. I'm the happiest I've ever been.

"It's overwhelming, you cant put it into worlds. It's the greatest gift in the world. I'm so happy."

Alexandra rose to fame back in 2008 when she won the fifth series of The X Factor, beating boyband JLS. She announced the birth of her little one on Instagram with an adorable snap of the baby’s tiny feet.

“Welcome to the world our little grape. We already love you more than words can say,” she wrote

Alexandra and Darren have been dating since 2021 and announced they were expecting their first child together in February.