Season 1 of 13 Reasons Why ended with a cliffhanger about Alex’s fate after he shot himself in a suicide attempt, but if you followed the show’s social media accounts leading up to the Season 2 premiere, you would’ve known that Alex was confirmed as alive well before new episodes launched on Netflix. He regularly posted updates on his condition to Instagram and also revealed that he now has to use a cane to walk. What didn’t appear online was Alex’s discovery that he had left his parents a suicide note, which consequently introduces a new mystery to the show. Alex’s suicide note on 13 Reasons Why Season 2 has fans scratching their heads about its meaning. This post contains spoilers for 13 Reasons Why Season 2.

Before returning to school for the first time since his suicide attempt, Alex asks his mother in Episode 1 if he had left a note and, despite her protests, he chooses to read the message his parents found after his shooting. It isn’t just the details of the accident that his mind is blurry about — Alex later reveals to Tyler that he doesn’t remember anything from up to a month before shooting himself, which complicates things for his potential testimony in the Bakers’ case. His memory loss explains his confused reaction to the suicide note, which reads, "I could’ve stopped it." 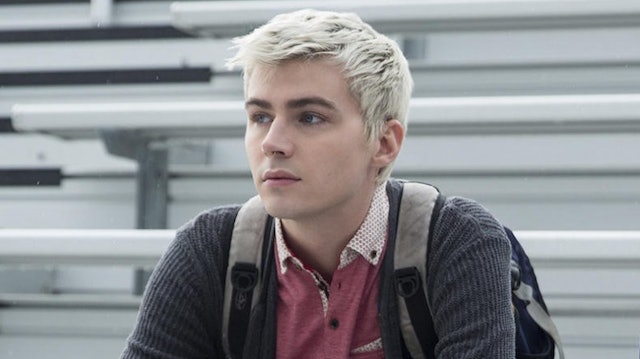 Both his mother and Clay are convinced that the message just equates to Alex’s guilt about Hannah, but Alex isn’t so sure. The fact that Liberty High has now banned students from discussing suicide and Alex’s condition doesn’t exactly help his uncertainty. He also doesn’t know if he’ll get to testify on Hannah’s benefit in court, which fuels any torn feelings he has about his old friend.

Meanwhile, we also learn that Tyler regularly visited Alex when he was in a coma, creating a bond that Season 1 hinted at when Alex stood up for Tyler in a fleeting moment. Desperate for answers about his suicide attempt, Alex even willingly looks at photos Tyler took of him in the hospital (weird, but Tyler has definitely done creepier). Although the viewer doesn’t see the photos, Alex seems horrified about what he did to himself. Does his cryptic message relate to himself and the pain he inflicted?

Thankfully, Alex’s focus isn’t entirely on what he meant in his note. Returning to school alongside Jessica leads to the former couple relying on each other more than ever before. Their pre-Season 2 social media posts already hinted that they’re hanging out again, even suggesting that they had gotten back together, but such isn’t the case. Instead, the two are dealing with being at the center of school gossip by agreeing to say that neither of them remembers what happened to them.

While he’s still determined to figure out what he meant in his note, Alex receives another message in Episode 2 that’s written on gun target paper, saying, "Better luck next time." Consider this alongside Clay’s "Hannah wasn’t the only one" polaroid and the hanged blow-up doll Jessica receives, and you can tell someone is targeting those closest to Hannah relentlessly.

Given the fact that every character’s struggles inevitably tie back to Hannah’s own suicide, it wouldn’t be a major surprise for Alex’s note to relate to Hannah. Then again, plenty of tinier components contributed to her death, and perhaps Alex feels responsible for one of those specific reasons in a way that Season 1 didn’t explain. If he makes it to the witness stand in court by the end of the season, maybe we’ll receive more clarity about how Hannah’s death led to Alex’s decision to commit suicide. Until then, there are definitely other mysteries Alex can help his friends solve during the drastic weeks of the Bakers’ trial.