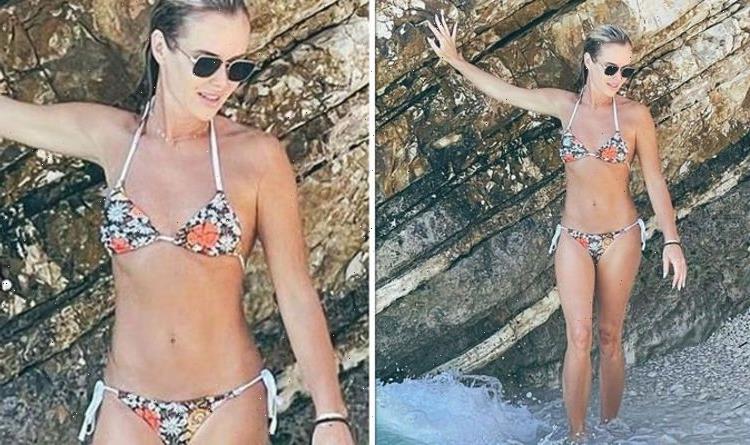 Amanda Holden flips her hair while in a swimming pool

Britain’s Got Talent judge Amanda Holden, 50, has put on an eye-popping display in a tiny bikini as she continues to enjoy her holiday in the Mediterranean. The TV personality took advantage of a trip to the beach to snap a picture of her incredible figure, as she continued to leave her followers in awe of her youthful appearance.

In view of her 1.7 million Instagram followers, the star struck a sultry pose as she continued her holiday in Greece alongside her family.

Donning a tiny triangle bikini, Amanda carefully kept her balance by holding onto a giant rock as she stood in the surf.

The star’s hair had been naturally styled by the ocean, as she wore it pulled back from her face.

Finishing off the look, Amanda wore a large pair of square-shaped sunglasses and a simple gold necklace.

The radio presenter showcased her sun-kissed, Mediterranean tan, which she has gained over the last month of sitting under the Grecian sun.

Seemingly poking fun at herself, Amanda captioned the picture: “My #rock,” alongside a laughing face.

Another social media user penned: “You’re now making me jealous of a ROCK.”

Over the course of the last four weeks, the TV personality has not been shy when it comes to sharing her holiday snaps.

The TV star has enjoyed posing up a storm in the sun-soaked country, where she is enjoying spending time with her husband Chris Hughes and two daughters, Hollie, nine, and Alexa, 15.

A recent snap suggests that Amanda’s mum has also flown out to spend quality time with her daughter and her brood.

Days ago, the mother-of-two had a near miss with a wardrobe malfunction after deciding to go braless during a boat trip.

Wearing a plunging V-neck white dress, Amanda bravely wore the daring outfit during a wavy boat ride, which could have easily resulted in the star slipping out of her dress.

This isn’t the first time the blonde-haired beauty has been on a boat during her Mediterranean trip, as she previously posted an enviable snap of herself posing at the back of a boat.

Sporting a white bikini, Amanda put on a jaw-dropping display as she enjoyed the crystal-clear sea and blue skies.

The ITV star has interspersed pictures of herself with those of her family.

Amanda posted an incredible picture of herself and husband Chris Hughes at the start of their holiday, leaving many of her fans in shock at the duo’s youthful looks.

One wrote: “Is that actually now ..You look about 25 Amanda.”