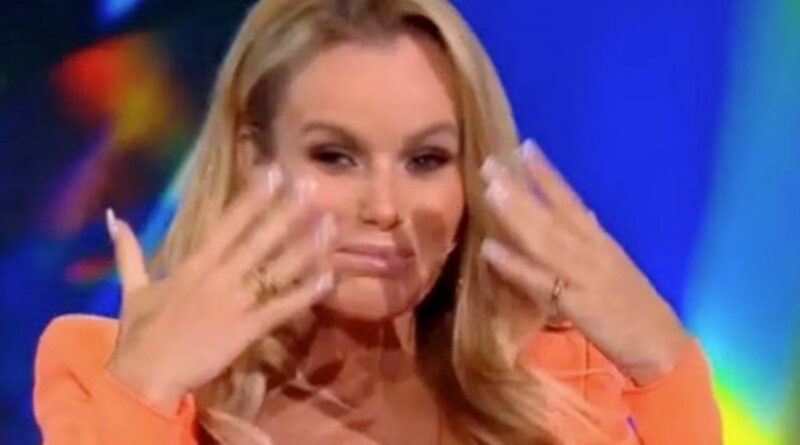 Amanda Holden was left in floods of tears as a contestant won £10,000 on BBC One show I Can See Your Voice on Saturday 22 October.

The gameshow sees panellists Amanda, 51, Jimmy Carr, 50, and Alison Hammond, 47, help a team of two players judge between mystery singers without being able to hear them. The players must base their judgements on lip-sync performances, clues and interrogations.

Charlie and Dexter were introduced to the show over the weekend, being tasked with trying to figure out who could hold a tune when they duetted with a guest musical celebrity.

Alexandra Burke, 34, who welcomed her first child in July this year, appeared on stage for the duet alongside Brooke Barber, who dazzled the panellists with her incredible voice.

As the pair belted out the lyrics of Whitney Houston's Saving All My Love For You, Amanda couldn't help but break down in tears as she held her hands up to fan herself.

It didn't go unnoticed by host Paddy McGuinness, 49, as he immediately said: "Amanda was in tears!" following the performance.

Fans also flocked to Twitter to share their thoughts on Brooke's voice as one person wrote: "WOW!! What a bloody fantastic voice that girl Brooke Barber has. Definitely gave Alexandra Burke a run for her money! Think Whitney would be proud too!" alongside a celebration hands emoji and two clapping hands emojis.

It comes after Amanda recently suffered a wardrobe malfunction in a sponsored Instagram video, where she revealed more than intended in a clip to promote a shampoo product.

The star was seen in the footage at first wearing a white bathrobe, before she slipped it off and quickly transformed into a glamorous gold and black fitted dress.

Amanda, who recently took her stylish lookalike daughter to work with her, captioned the clip: “This is my go-to product. Especially when I'm planning on going out for the evening."

Fans didn’t pay much attention to the product discussed in the advert however, as they noticed that Amanda had flashed herself while turning to the side, mid-change, in the video.

Followers flocked to the comment section to point out the blunder to the Britain’s Got Talent host, following the startling post.

One person wrote: “Urm, did she just flash?”

A second wondered the same, as they said: “Was that an intention nip slip? Hope Insta don’t pull your account @noholdenback”.

Someone else commented: "Lovely dress but the transition needed to be more careful”.