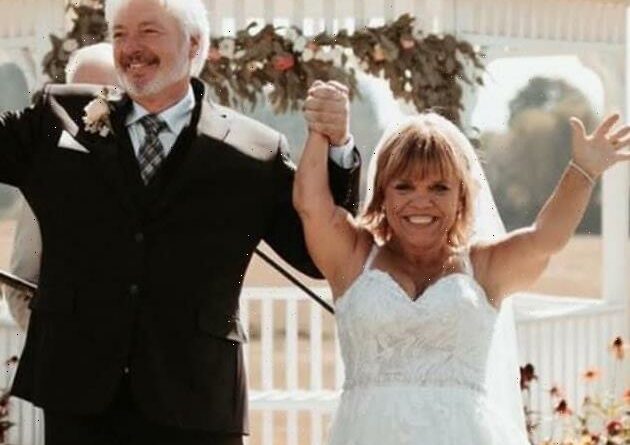 We’ve known this for about two and a half months, of course.

But TLC aired a special episode of Little People, Big World this past Tuesday … and it gave viewers a glimpse at the exact vows that were exchanged on this special day.

First, however, this special featured an unusual conversation between Matt Roloff and Marek, who have developed a pretty close friendship.

“I haven’t written the vows yet. Amy wants to exchange vows,” Chris  confessed to Matt on air, admitting he was nervous about all eyes being on him and about coming up with his own romantic words.

“I’m going to be trying real hard to lock everything down.”

Matt, who was married to Amy from 1987 through 2016 and who shares four kids with the reality star, offered up some advice to his ex-wife’s second husband.

“Chris, take it from me: a little emotional flow, that’s good,” Matt told the anxious groom-to-be, who replied as follows:

“I’m okay with, you know, [showing] my emotions in private. I don’t like a lot of people watching me.”

In the end, though, Marek came through when it mattered most.

“You were a very unexpected surprise. I don’t think it was love at first sight for both of us — for either of us,” Chris said at the altar.

He then fought back tears and added:

“Our love has grown from a much deeper connection that comes with time and experience and common ground.

“You are finally the one that I have found that I can trust my heart with. I make this promise to you to do all I can to deserve your love and to never break your heart.”

Chris and Amy met at paint and sip event in Oregon, no real romance blossomed between the pair until a 2016 pool party.

By September 2019, after three years of being together, Marek proposed — and, after the couple delayed their nuptials due to the COVID-19 pandemic, they finally became husband and wife in late August.

During her own vows, Amy brought up about their growth as a couple, telling Marek that he always makes her smile and laugh.

And, at the end of the day, that’s almost all that matters, you know?

“You’ve helped me to open up my heart again little by little because you were also willing to open up yours to me,” she said at her ceremony.

“You have become my best friend.

“You are definitely my partner, my love, my teammate, and the one I look forward to going on this life journey with for the rest of my life.”

Elsewhere on this two-hour special, Roloff broke down in tears.

And, still elsewhere, she expressed extreme discomfort talking in depth about her sex life.

We don’t blame her at all.