Home » Celebrities » Anne Hegerty in cheeky swipe at ‘slow’ Who Wants To Be A Millionaire? after Clarkson snub 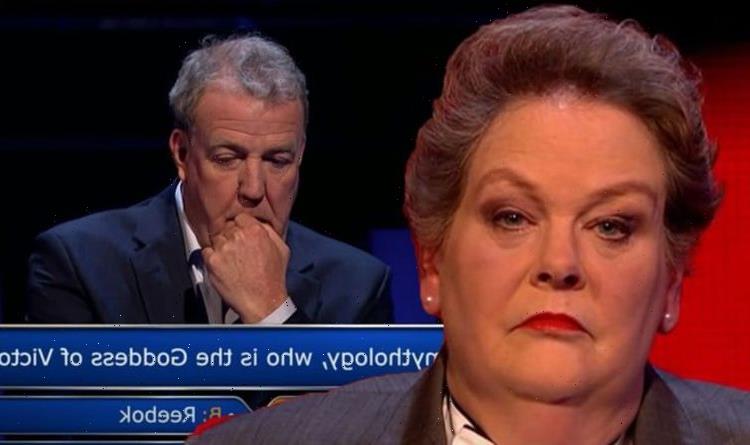 Anne Hegerty, 63, has spoken exclusively to Express.co.uk, discussing Jeremy Clarkson’s, 61, snub on his quiz show Who Wants To Be A Millionaire?. The former Top Gear star claimed he did not know who Anne was, in an episode that aired in August.

I don’t watch Millionaire as it’s quite slow

Express.co.uk asked The Governess if she watched Jeremy’s quiz show, Who Wants to Be A Millionaire?

She replied: “I don’t watch Millionaire as it’s quite slow and there are not a lot of questions.”

Anne added: “If it doesn’t sound disloyal, there are a lot of good BBC quiz shows like University Challenge and Mastermind.

“I should be downloading them but my phone is full.”

Anne’s blow at Jeremy’s quiz show comes after he admitted he did not know who The Governess was on television.

The episode in question took place on August 16, when a contestant required Jeremy’s help.

He was asked: “Since 2016, who has hosted the TV game show that requires teams of five to name items in top 10 lists?”

Viewers were left shocked at Jeremy’s response when the contestant asked him for his answer.

He said: “I’ve never even heard of two of the people in this list – Adil Ray and Anne Hegerty.”

Fans sent messages to Jeremy on Twitter to question if he was telling the truth.

Kathymaryholmes said: “@JeremyClarkson Never heard of Anne Hegarty !?!?! Thought it was worth a smug laugh?”

In view of his 7.4 million followers, Jeremy replied: “I really hadn’t. Or the other chap.”

Anne responded to this comment at the time hoping Jeremy may finally know who she is.

She said: “He’s probably far too busy to watch either The Chase or Britain’s Brightest Family!”

Express.co.uk asked Anne how she felt about Jeremy not knowing who she was.

She said: “I can understand though.

“I often say nobody with a job knows who I am.

Anne added: “We are on at five o’clock in the evening and everyone is coming home from work.”

You can catch The Chase every weekday at 5pm.