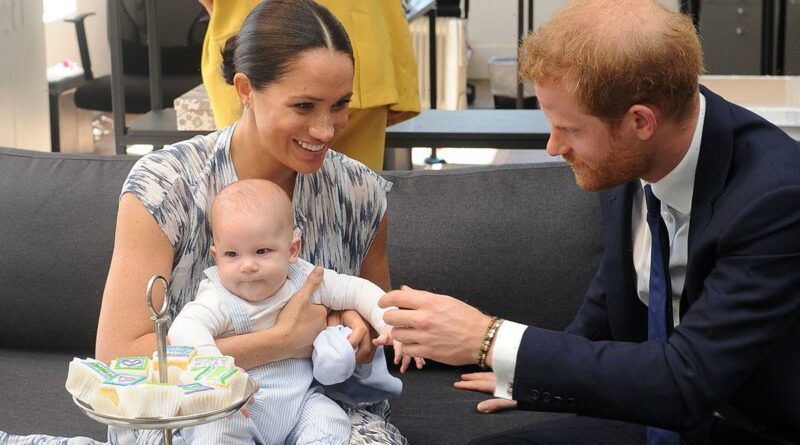 A new photo of the Duke and Duchess of Sussex’s son, Archie, has been shared as Meghan made an appearance on The Ellen DeGeneres Show on Thursday

The two-year-old, who has inherited his father Prince Harry‘s red hair, can be seen collecting eggs from his chicken coop, Archie’s Chick Inn, at the Sussexes’ Montecito home.

Archie, who has his back to the camera, sports a blue jumper with jeans and yellow wellington boots.

The tot has only made a handful of public appearances since his birth in May 2019, notably on Harry and Meghan’s royal tour of Africa in 2019.

He also made a brief appearance in footage shared during the couple’s Oprah Winfrey interview in March, which showed the little boy playing on a beach with his parents and their dogs, Guy and Pula.

The Duke and Duchess are yet to share a photo of their daughter, Lilibet, who was born in June.

Several family photos could be seen on Meghan’s desk in a special video to mark her 40th birthday in August, with many royal fans guessing that one of them could be Harry holding his baby girl.

Meghan talks family life in the US

During the interview, which airs on Thursday, Meghan shared updates about family life in the US, revealing how she and Harry celebrated Halloween with their children.

The Duchess said: “We wanted to do something fun for the kids but the kids were just not into it at all. Archie was a dinosaur for maybe five minutes…”

Ellen, who joined the Sussexes for the annual holiday, replied: “No, not even for five minutes, finally Harry talked him into having the head on, but Lili was a skunk.”

Meghan laughed and added: “She was a little skunk… like Flower from Bambi.”

During her first TV interview since having Lilibet, the Duchess and former actress will talk about her return to the Warner Bros. lot – familiar to her from auditions she attended in the past – but also opened up on life with a young daughter.

In the interview, Ellen, who is Meghan and Prince Harry’s Montecito neighbour, reveals that “Lili’s now teething” before Meghan jokes that she is looking for ideas to help relieve the pain to which Ellen replies: “Tequila, anything.”