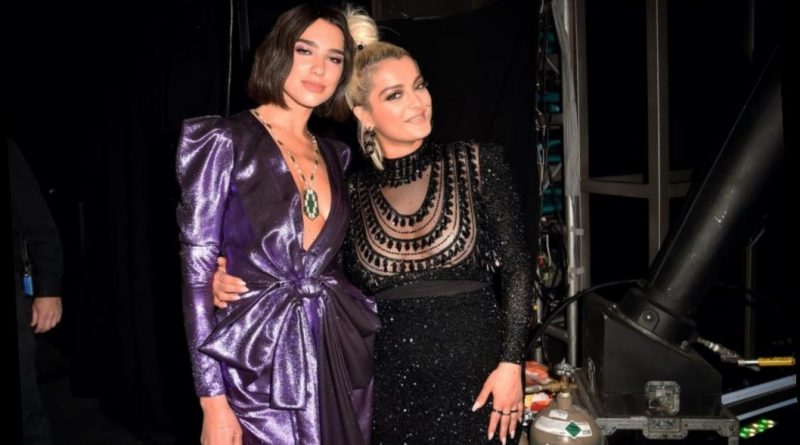 Popstar sensation Dua Lipa is currently one of the hottest performers in the music industry. The three-time Grammy Award winner has global appeal and recently lit up the Grammy stage with a live performance of her chart-topping hits “Levitating” and “Don’t Start Now.” Fans often assume the celebrity is related to singer-songwriter Bebe Rexha, who is a successful recording artist in her own right. Best known for her country hit “Meant to Be” with Florida Georgia Line, Rexha has collaborated with The Chainsmokers, Machine Gun Kelly, and Doja Cat. While both women reign from Albania, are they sisters, cousins, or just good friends?

What is Dua Lipa’s net worth?

Lipa is enjoying enormous success, recently winning a Grammy Award for Pop Vocal Album. Future Nostalgia was her second album that featured “Don’t Start Now” as the lead single. The album, released in 2020 during the coronavirus (COVID-19) quarantine, was met with widespread critical acclaim. The 25-year-old performing artist told People:

“… spending much of the last year in lockdown helped her really be able to ‘take it all in’ in terms of the positive feedback surrounding the album.” The musical sensation commented that she “never thought this would happen in a million years – that I would be promoting my record from my sofa or setting up green screens in my living room.”

Lipa began her career as a fashion model before signing with Warner Bros. Records in 2014. She released her first successful song, “Be The One,” in 2015, followed by her self-titled LP in 2017. The singer-songwriter, who has an estimated net worth of $16 million, according to Celebrity Net Worth, has officially achieved rock-star status with Future Nostalgia going platinum. In 2019, Lipa won the Best New Artist Grammy Award, nominated alongside her friend and fellow performer, Bebe Rexha.

Why fans see the similarities between Dua Lipa and Bebe Rexha

Rexha started her career in the music industry as a songwriter, skyrocketing to fame after writing the 2015 Grammy Award-winning hit, “The Monster,” for Rihanna and Eminem, according to Slate. The hard-working artist began collaborating with artists such as Nicki Minaj, Afrojack, and G-Eazy as she tried to make a name for herself.

It wasn’t until 2016 when Rexha worked alongside Florida Georgia Line on “Meant To Be,” that she became a household name. The hit song spent 35 weeks in the number one spot on Billboard’s Hot Country charts, and the country singer wannabe popstar was on her way. Following her passion for pop music, Rexha worked with DJ Martin Garrix on “In the Name of Love.”

Her newest album, Expectations, quickly climbed the charts, featuring the hit single “I’m a Mess.” Rolling Stone reported the provocative new music video for “Sacrifice,” her highly anticipated single, “addresses the attention needed to nurture a relationship and references Nineties films such as Blade and the Matrix franchise.”

Despite both artists being from Albania, they are not related. Although, the “New Rules” singer does admit everyone from her home country refers to one another as cousins. Lipa, whose parents are from Kosovo, was born in London. She spent several years living in the Balkan Islands region before coming to America to start her music career. Rexha’s parents are both from Macedonia, and she was born and raised in Staten Island.

Both women speak Albanian and are very proud of their heritage. Lipa is her given name and means “love” in her native language, according to Capital FM. Rexha was born Bleta, which means “bee,” thus her performing name of Bebe.

Rita Ora and Ava Max are also of Albanian descent and are putting out chart-topping hits, with Billboard saying, “Albanian artists are having a moment.” The co-writer of Ariana Grande’s hit singles, “Thank U, Next” and “7 Rings,” who is also from Albania, told Billboard that Albanian women have a “drive to create a better life.” She said, “My mom always told me we’re the way we are because we’re Albanian. We’re a bit crazy, and we never give up. It’s in our blood.”