Home » Celebrities » Are Rob Gronkowski and Camille Kostek Still Together?

Rob Gronkowski might have retired from the NFL, but at such a young age, he has pretty much his entire life ahead of him. The former New England Patriot known as “Gronk” has actually seen plenty of new opportunities since he ended his football career. As far as his love life goes, Gronkowski started dating Sports Illustrated model Camille Kostek back in 2015 — but are they still together? 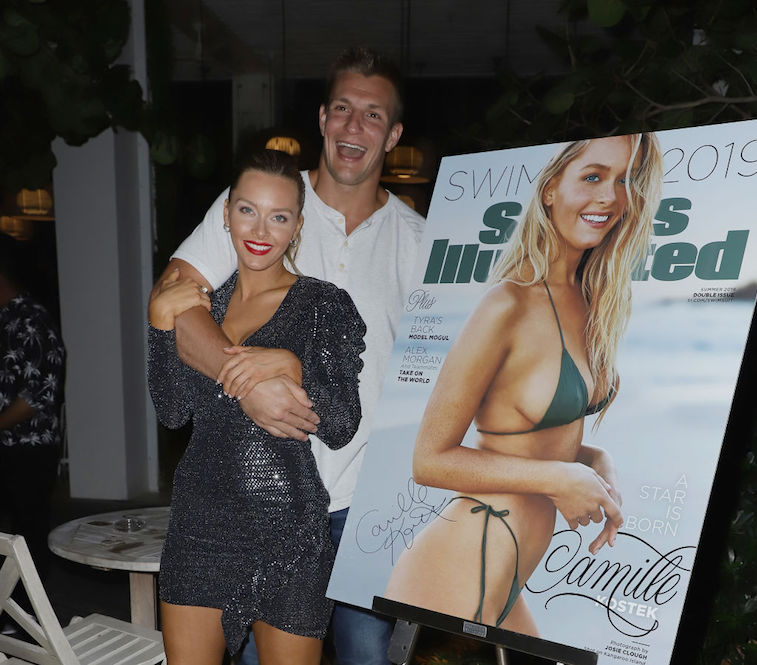 Gronkowski and Kostek first got together in 2015

Kostek started out as a cheerleader for the New England Patriots, but she’s developed a massive career since then. However, she always knew who Gronkowski was when he was on the field, but the two never met. NFL players typically aren’t allowed to get involved with cheerleaders, and Kostek and Gronkowski didn’t actually have any contact until after she left the team. From there, though, things heated up quickly. She officially left the team in March 2015, and by summer of that same year, Gronkowski had made his first appearance on her Instagram.

cheered him on from a different kind of sideline tonight and both of our uniforms look a little different ??? side stage for my baby’s debut @nflonfox ?

They took a break in 2017, but were quickly on-again

The two were going strong for a while, and they even attended public events together, such as the 2016 Kids’ Choice Awards. They were at each other’s sides for their birthdays, and Kostek rooted for her man from the stands while he continued his NFL career with the Patriots. There were rumors that the two took a break at the beginning of 2017; according to E! News, a source close to Gronkowski said he had moved on. However, by May 2017, the couple was back together. Kostek’s career started to take off, and she officially became a Sports Illustrated swimsuit model in 2018. The two managed to stay together through their busy work schedules.

Kostek has made very few appearances on Gronkowski’s Instagram

Though Gronkowski and Kostek have been dating since 2015 (with the exception of a possible brief hiatus in 2017), the model has made surprisingly few appearances on his Instagram. On Valentine’s Day in 2019, Gronkowski posted a photo with Kostek captioned, “Happy Valentine’s Day to my baby! See you soon!!” She made another appearance several months later in July, when the two attended the Espy’s together. But those are the only two photos Gronkowski has posted with Kostek all year.

It appears the two are still together — but no ring yet

Anyone who looked at Gronkowski’s Instagram would find it difficult to tell whether he and Kostek were still together. However, Kostek has been more open about the relationship on her Instagram account. She posted a photo with Gronkowski on October 12, confirming that the two are still in a relationship. While they’re still going strong, it doesn’t look like they’ll be walking down the aisle any time soon. Gronkowski has yet to pop the question to his girlfriend of more than four years, but it’s possible he’s thought about it and is just waiting for the right time. Either way, these two seem to be in love, so we’re certain they’ll tie the knot eventually.

Chrishell Stause Is Dating DWTS Pro Keo Motsepe, and They Are Too Adorable

Our decision not to upset an aggressive ally
Travel

Yorkshire couple spend £23k transforming van into mini hotel – with fully working tiled bathroom and kitchen
We and our partners use cookies on this site to improve our service, perform analytics, personalize advertising, measure advertising performance, and remember website preferences.Ok