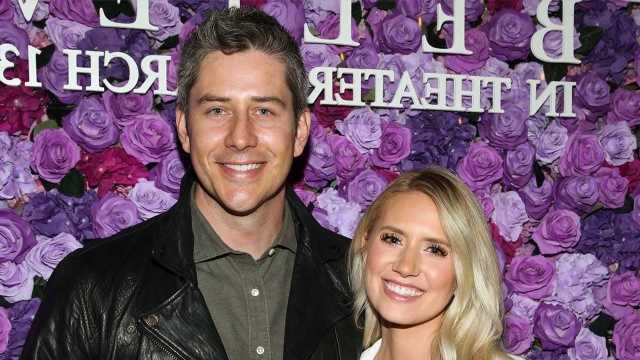 Arie Luyendyk Jr. and Lauren Burnham have revealed the name of their baby boy! In a YouTube video on Wednesday, the couple, who welcomed twins on June 11, announced that they named their son Lux.

The name reveal came as Luyendyk and Burnham were getting ready to head home with their son and introduce him to their older daughter, 2-year-old Alessi. Their newborn daughter, whose name has yet to be revealed, had to stay behind in the hospital due to breathing issues.

“We’re sensing a little jealousy from Alessi already on FaceTime, so it could go really cute and sweet or she could go, ‘Ah!'” Luyendyk said of introducing the newborn boy to his big sister.

But the couple needn’t have worried about it, as the minute they arrived home Alessi took to her big sister duties expertly. She began by holding her sleeping brother on the couch, adorably commenting that the baby’s “night night.”

The toddler was actually the one to announce the newborn’s name, after Arie asked, “Alessi, what’s his name?”

The trio moved to the nursery next, where Alessi once again held Lux and, with Burnham’s help, sang “Rock-A-Bye Baby” to him.

“Really cute to see Alessi and Lux. Also really sad for Lauren, she’s having a tough time,” Luyendyk said at the end of the video, referencing his baby girl’s extended stay in the hospital.

Burnham revealed that their newborn girl would have to stay hospitalized on Tuesday “I’ve never felt heartbreak like this,” she wrote. “Pls say prayers for our girl.”

“She’s having some trouble with her breathing. She’s not on oxygen. She’s perfectly healthy. Her development, she’s a little bit behind, so if she gets really relaxed her heartrate slows down because her breathing is slowing and that is concerning,” he said. “You don’t want to take her home and have something happen, so they’re just being extra, extra careful.”

In a Wednesday post to his Instagram Story, Luyendyk said his youngest daughter is “doing much better now.” Later that day, Luyendyk shared a video of himself rocking the newborn girl in the hospital, writing that he was “checking in on our baby girl.”

Shortly thereafter, the proud dad shared a shot of himself kissing his son’s head. “Hanging with this one while we wait for his sister to come home,” he wrote. “Love him so much.”

Luyendyk announced the twins’ arrival on his Instagram Story shortly after their birth.

“@luyendyktwins are here! Momma and babies are doing great and everything went smoothly,” he wrote. “Spending time cherishing these moments, thank you all for the support.”

Just days later, the proud parents shared the first photos of their newborns.