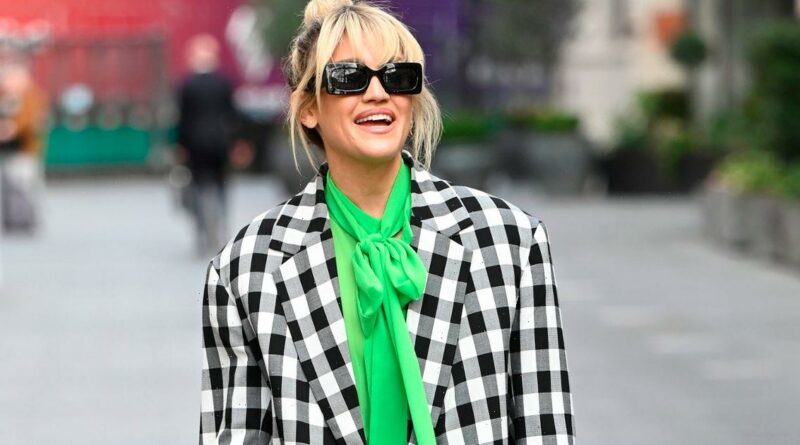 Ashley Roberts stepped out in an eye-catching black and white outfit on Wednesday 9 February, after putting on a sizzling display at the Brit Awards the night before.

She accessorised the ensemble with a pair of black snake print court heels and a tiny black bag with a similar patterned fabric, also in black.

Ashley, who recently took style tips from Amanda Holden, covered her eyes with a pair of bold, black sunglasses and tied her hair in a high bun but had her stunning full fringe covering her forehead.

She was snapped leaving the Heart FM studio in London after working on Heart breakfast alongside Amazing Holden and Jamie Theakston, who host the show.

Ashley's early morning start was undoubtedly a bit a struggle for the star, as she had attended the glittering Brit Awards at the O2 Arena the night before.

The former singer-turned-presenter didn't seem phased by the early morning after the late night as she posted a video of herself on her Instagram story, which showed her dancing at 6.24am on Wednesday morning.

Ashley later posted a photo of herself stood in front of a branded Heart Radio microphone and added the time stamp of 7.05am before putting a GIF on which read: "We're live!"

Former Pussycat Dolls singer Ashley made a sizzling entrance on the Brit Awards 2022 red carpet the night before in an eye-popping cut out dress.

The radio presenter opted for a fabulous black floor length gown by high end designer Monot, which came with quite the collection of missing fabric.

Not only did the perfectly placed cut outs leave us complimenting the blonde on her figure but the risqué thigh high split excellently showed off her long toned legs.

Ashley let the dress do all the talking as she kept accessories to a minimum and styled the outfit with a simple pair of black strappy sandals.

The star was on hand to interview music stars on the red carpet for Heart FM and even attended the glittering ceremony where Adele scooped three awards and Ed Sheeran made a touching tribute to his wife Cherry.

Ed, 30, dedicated his accolade to his beloved wife as he said: "My wife Cherry, who at the drop of a hat, will come to the middle of nowhere to a really secluded studio and live in house, be so supportive while we just make songs and songs and songs. So thank you so much, you're the best!"

For updates on all your favourite celebs, sign up to our daily newsletter here.