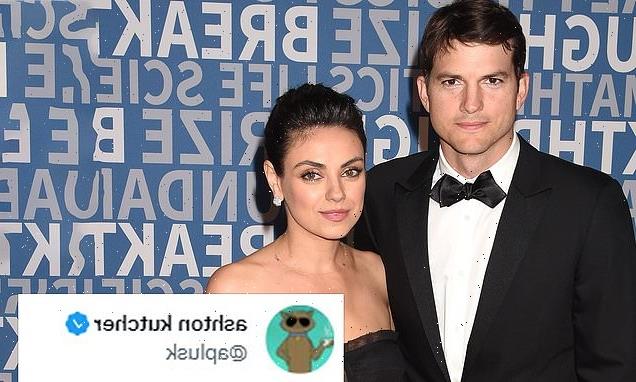 ‘I stand with Ukraine’: ​Ashton Kutcher shows support for wife Mila Kunis’ native country amid Russia attacks… as he leads stars speaking out against war

Ashton Kutcher lead celebrities tweeting their support for Ukraine on Friday following Russia’s attack of the country at the order Vladimir Putin.

‘I stand with Ukraine,’ the actor simply wrote. Ashton, 44, is married to his Ukrainian-born wife Mila Kunis, who is not on social media.

Kunis, 38, comes from a Jewish family and moved to Los Angeles from Ukraine when she was 7-years-old.

She has previously cited antisemitism in the former Soviet Union as one of the reasons her family fled the country. 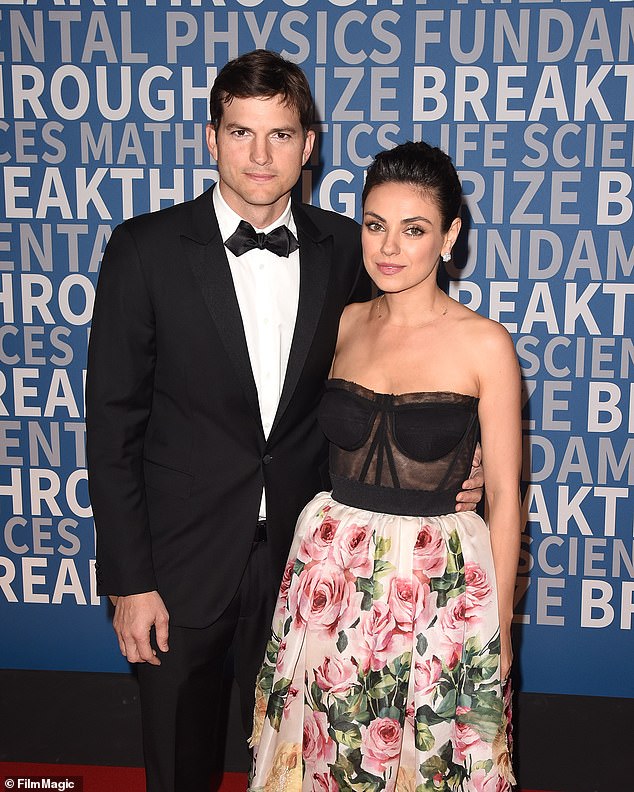 ‘I stand with Ukraine’: ​Ashton Kutcher shows support for wife Mila Kunis’ native country amid Russia attacks… as he leads stars speaking out against war

Meanwhile Kylie Jenner, Khloe Kardashian, and actress Hayden Panettiere also spoke out on Friday, as reports have suggested Putin could resort to using a high-power thermobaric weapon, dubbed the ‘father of all bombs.’

‘God protect the people of Ukraine,’ Kylie wrote on her Instagram Stories to her 314million followers, adding: ‘My thoughts and prayers are with you.’ 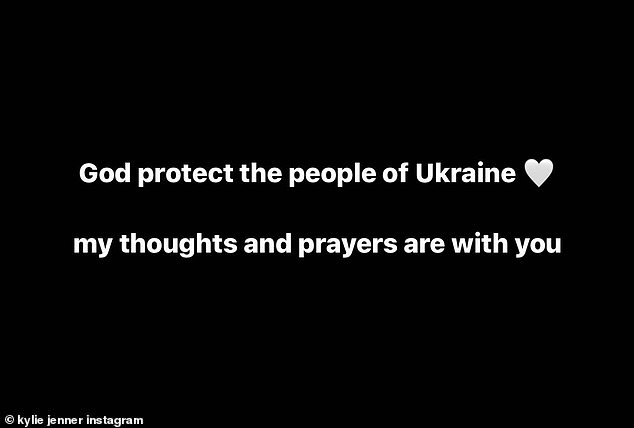 ‘God protect the people of Ukraine,’ Kylie Jenner wrote on her Instagram Stories to her 314million followers Friday, adding: ‘My thoughts and prayers are with you.’ 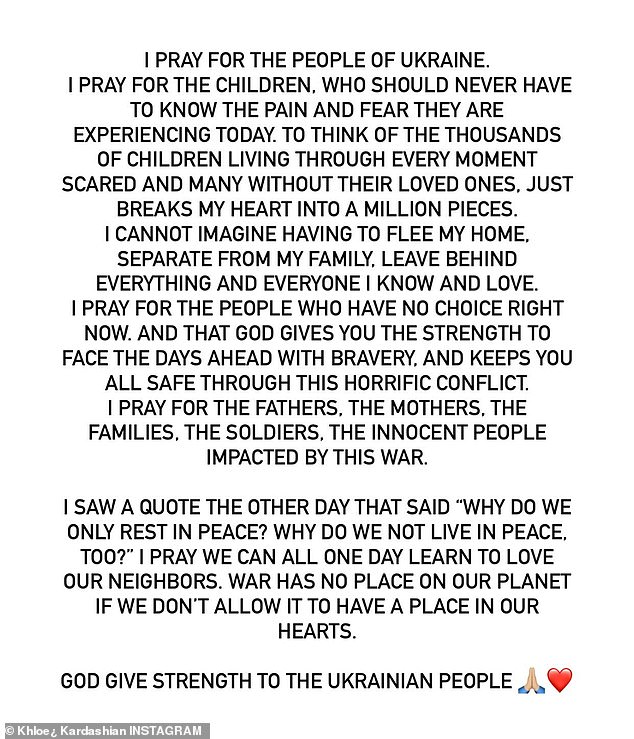 She re-posted a message from the Ukrainian former professional boxer.

‘I am writing to you from Kyiv, the capital of a country at war, a country being attacked and invaded from all sides,’ Wladimir, 45, wrote in a post from Feb. 24.

‘It is not “the war of Ukraine,” it is Putin’s war. Meticulous preparations were hidden behind the fog of the last few weeks in order to set in motion a plan that had been drawn up for months. No more fog and false diplomatic declarations.’ 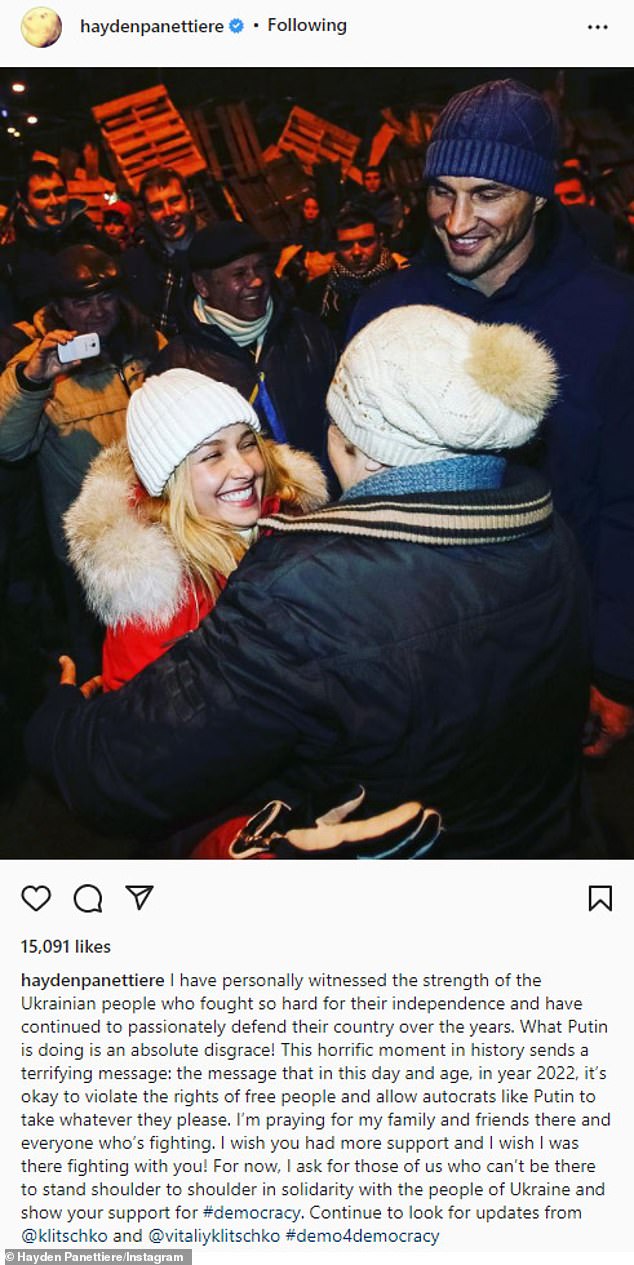 In her own post, Hayden wrote: ‘I have personally witnessed the strength of the Ukrainian people who fought so hard for their independence and have continued to passionately defend their country over the years.’

‘What Putin is doing is an absolute disgrace! This horrific moment in history sends a terrifying message: the message that in this day and age, in year 2022, it’s okay to violate the rights of free people and allow autocrats like Putin to take whatever they please.’

She added: ‘I’m praying for my family and friends there and everyone who’s fighting. I wish you had more support and I wish I was there fighting with you! 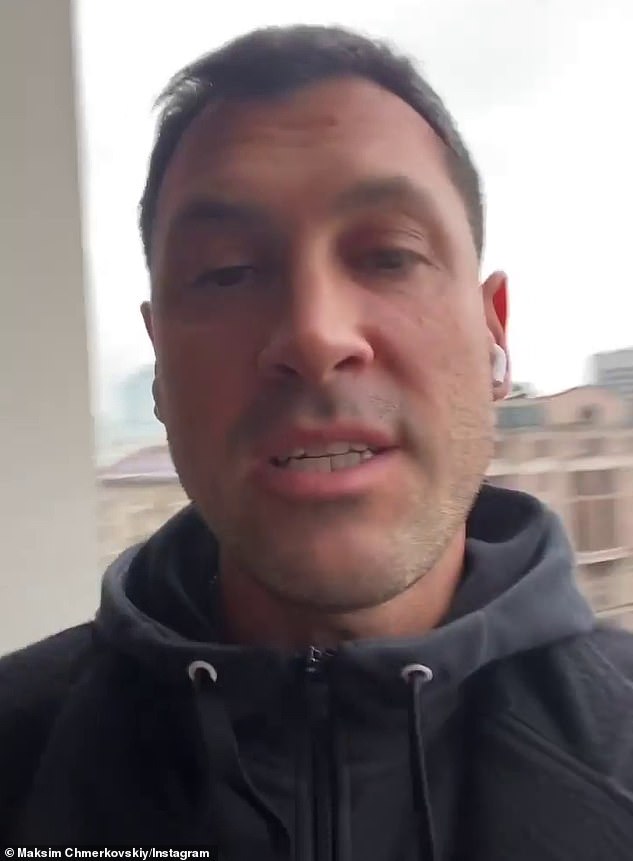 ‘S**t’s going down’: Ukrainian-born Dancing With the Stars pro Maksim Chmerkovskiy is fearing for his life and the lives of his friends in Kyiv following a Russian invasion into the country over night

Ukrainian-born Dancing With the Stars pro Maksim Chmerkovskiy has also been giving live updates from the country’s capital city where he is currently staying.

The professional dancer, 42, posted two videos on Friday telling fans he’s ‘safe’ but gave warning of the increasingly ‘aggressive’ and ‘dire’ situation in the country.

He also clarified in the second video that he is ‘not currently trying to leave’ Ukraine, explaining: ‘I’m not moving towards the border… it’s, I heard, not safe.’

His comments come as it was reported Friday that men of ‘fighting age’ were told to remain in the country as Russian missiles pounded Kyiv, according to Reuters.

Meanwhile, tens of thousands of Ukrainians – mainly women and children – are reported to have crossed into Poland, Romania, Hungary and Slovakia.