Home » Celebrities » The ‘Avengers: Infinity War’ Ending Is Blowing Fans Minds’ All Over The World & I’m Not OK

The long-awaited superhero spectacle Avengers: Infinity War has finally arrived, fulfilling essentially every Marvel fan’s greatest wishes about what the epic blockbuster would bring us. No surprise, but the film’s ending is particularly mind-blowing, and fans are still trying to wrap their heads around this massive turn of events. Spoiler Alert: Spoilers for Avengers: Infinity War follow. The last few minutes of Infinity War were understandably crazy and and hectic, so what happened at the end of Avengers: Infinity War?

The Avengers’ battle against Thanos and his quest to retrieve all six of the Infinity Stones came to a head in Wakanda, and things turned ugly when Thanos showed up in search of Vision’s Mind Stone. Although the team had originally planned for Shuri to extract the Stone from Vision and have Wanda destroy it without harming Vision, the women ran out of time, forcing Wanda to extinguish both the Stone and her lover Vision in one go. For a second, it seemed that the Avengers had won this mission, but Thanos turned back time, bringing Vision back to life just to remove the Stone and kill him in the process.

Now having all six Infinity Stones, Thanos began carrying out his goal of eliminating half of humanity. Most of the Avengers, both in Wakanda and across the universe, began disintegrating, fueling fans’ theories about how the survivors will rescue them in the next film and the possibility of Thanos having sent them off into another timeline. One by one, the heroes in Wakanda disappeared, seemingly only leaving Captain America, Black Widow, Thor, the Hulk, War Machine, and Okoye to battle against the unknown in the next film. 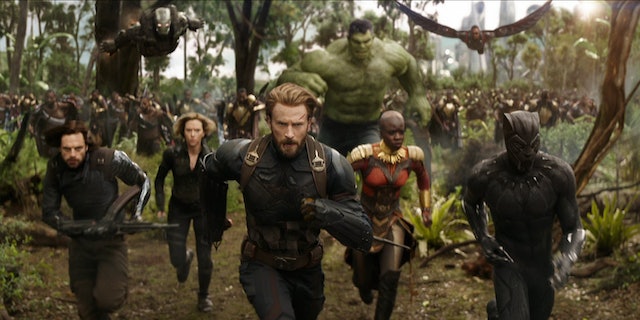 The survivors in Wakanda also gathered around the motionless body of T’Challa, who took a hard hit from Thanos in the group’s last attempts to physically beat him before he retrieved the last Infinity Stone. Compared to other lost superheroes, T’Challa’s body didn’t appear to disintegrate, and it seems unlikely that his body would disappear underneath his armor but the suit would remain. Either he was badly knocked out and will come to at the beginning of the next film, or Thanos actually killed him with the mere force of his body, eliminating T’Challa’s own chances of disintegrating. The simple detail of his suit of armor still being there is a giant hint that T’Challa isn’t gone for good.

Meanwhile, across the universe, where he and his teammates failed in preventing Thanos from taking the Time Stone from Doctor Strange, Iron Man watched as Strange, Drax, Mantis, Peter Quill, and Spider-Man disappeared. Now alone, Tony will face the challenge of getting back in touch with the other Avengers in the next film and figuring out what the heck just happened to his friends. His uncertainty isn’t the only concern for the Infinity War sequel, but for now, fans still can’t get over the explosive final scene of Infinity War, taking to Twitter to share their reactions:

You may have been able to pick up some pieces of your shattered heart thanks to the post-credits scene, which essentially confirmed Captain Marvel’s appearance in Avengers 4. Before we see how she may help the Avengers save the day in the next film, we’ll be introduced to the character, played by Brie Larson, in March 2019’s Captain Marvel film. It’s about time that Marvel releases a female-helmed film, so I’m more than OK with seeing Captain Marvel in theaters before Avengers 4 comes out next May.

If an Infinity War re-watch is in your future, I’m relying on you to dissect the last scene even more and find some sneaky Easter eggs hinting at what comes next. Having to wait a year for more Avengers answers is not ideal.