Spoiler Alert: Spoilers for Avengers: Infinity War follow. In the predominantly dark and fast-paced Avengers: Infinity War, Peter Parker, aka Spider-Man, was a sweet and innocent delight who tags along with the big kids on the Avengers’ mission to beat Thanos in retrieving the remaining Infinity Stones. He paired up with Iron Man and Doctor Strange for the majority of the film, eventually meeting some of the Guardians of the Galaxy. Like most of the superhero characters, he also disintegrated by the end of the Avengers’ final battle against Thanos in Wakanda. Amidst the sound of a thousand fangirls’ hearts breaking, viewers had to ask: Is Spider-Man in Avengers 4? The teen hero’s end isn’t quite what it seems.

Peter appeared early in Infinity War, spotting Thanos’ cronies’ spacecraft descending upon New York City while he was on his school bus. After getting best friend Ned to create a distraction, Peter ditched the bus, transforming into Spider-Man and quickly joining up with Tony Stark to investigate the ship’s arrival. In true Stark fashion, Tony was reluctant to let Peter come along on the Avengers’ quest, but after Peter stowed away on the spaceship, he didn’t have much of a choice otherwise.

The movie continued reminding us why we love this rendition of Peter Parker so much (Spider-Man is finally a believable teenager!), but like the majority of the other Avengers, he wasn’t meant to survive the mysterious mass wipeout that Thanos’ power surge caused. He took a little longer to disintegrate, stumbling into Stark’s arms and saying that he didn’t feel well before disappearing. 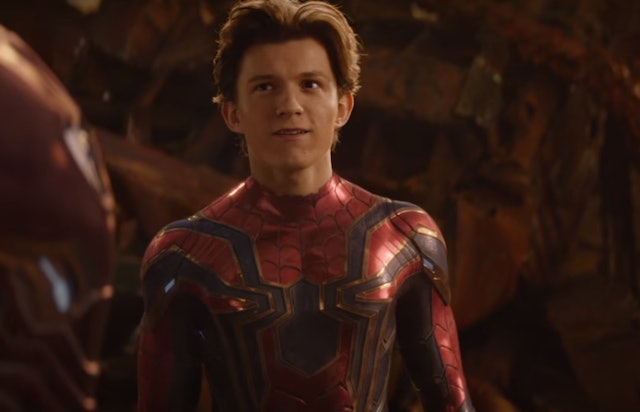 With only the original Avengers remaining as Infinity War ended (Hawkeye, where are you?), we have to remind ourselves that the fate of the Marvel franchise literally rests on newer characters like Tom Holland’s Peter. Case in point: the only Marvel movie confirmed for after the May 2019 release of the Infinity War sequel is a Spider-Man: Homecoming sequel. The follow-up film is set for a launch on July 5, 2019, only about a month after the Infinity War sequel debuts. While we can expect to see Captain Marvel (and a smooth segue into the character’s practically inevitable appearance in Avengers 4) in theaters next March, the rest of Marvel’s release schedule is a mystery. This may make other characters’ fates questionable, but for Spider-Man, an Avengers 4 appearance seems promising. Throw in the fact that Holland apparently broke his nose on the set of Avengers 4, and Spider-Man’s involvement in the film seems like a done deal.

According to Digital Trends, the new Spidey film will start filming in London this summer. Marvel Studios president, Kevin Feige, didn’t offer any hints as to why shooting will be located there, but hinted that Peter will also be in New York during the film. Speaking to IGN about the character, Feige said:

The sequel is expected to explore Peter’s transition back into being a "regular" teen after the events of Avengers 4, essentially confirming that he’s saved from whatever enigma wiped him from existence at the end of Infinity War. Producer Amy Pascal even revealed that the close timing of Spider-Man 2‘s arrival after Avengers 4 is no coincidence, telling Fandom:

Well, if there’s anyone we don’t have to worry about in Avengers 4, it definitely seems to be Peter Parker.