Fans have been calling Avengers: Infinity War the most ambitious crossover event in the history of superhero movies since even before it came out, and one subtle Easter egg throws an entirely unexpected new character into the mix as well. Believe it or not, a member of the Bluth family somehow managed to find their way into outer space! That’s right: Avengers: Infinity War includes an Arrested Development Easter egg that you might have totally missed!

Spoiler alert: To talk about the Easter egg, I will be describing one scene from the middle of Avengers: Infinity War, so mild spoilers ahead. Arrested Development fans might notice a familiar face when the Guardians of the Galaxy arrive in Knowhere to try to stop Thanos from getting the Reality Stone from The Collector. Now, we already know that The Collector has filled his cavern with the most unique artifacts from across the universe, and apparently, that even includes Blue Man Group hopefuls that can never be fully naked. Yep — Tobias Fünke himself appears to pop up in one of The Collector’s display cases. As Gamora sneaks up on her evil stepfather, we can see a bald man with a mustache and glasses painted entirely blue and wearing jean shorts for a brief moment in the background. I mean… that is just too much detail to not be Tobias!

But why would a serious superhero movie like Avengers: Infinity War include a reference to a cult sitcom from back in the mid-2000s? It seems like a super random thing to do, right? Well, actually, the new movie has a very strong link to Arrested Development. Anthony and Joe Russo, who directed Infinity War as well as prior Captain America movies The Winter Soldier and Civil War and next year’s followup Avengers 4, got their start in comedies, and Arrested Development was one of their first big directing gigs. Between them, the two brothers directed 14 episodes throughout the first two seasons of Arrested Development, from 2003 to 2005.

Although their background is extensively in comedy (think shows like Community and Happy Endings), the Russo brothers kept things serious when first jumped into the Marvel Cinematic Universe. That is mostly because of the character their initial movies were centered on: Captain America is the no-nonsense member of the Avengers, and his stories that involved tracking down and deprogramming his brainwashed best friend didn’t leave much room for jokes between the dramatics. But now that they got to play with the entire Marvel universe in Avengers: Infinity War, the Russo brothers seemed to have a lot more freedom to stretch their well-trained comedy muscles… and throw in a fun little nod to their first big TV show.

Interestingly enough, this is not the first time that Tobias Fünke has dipped his toe into the Marvel universe. In the fourth season of Arrested Development, which aired on Netflix in 2013, seven years after Fox cancelled the series, Tobias attempts to make money as a Fantastic Four street performer. Tobias dresses as The Thing, alongside his girlfriend DeBrie (Maria Bamford), who dresses as the Invisible Woman. 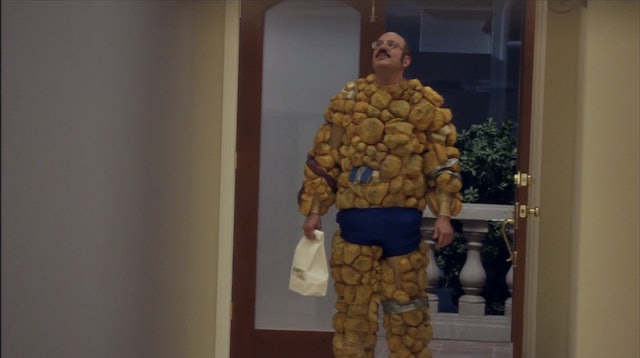 This could change next year, though, since Disney has proposed a deal to acquire Fox. If the deal goes through, the Russo brothers have already teased that they are interested in including the Fantastic Four and the X-Men in their upcoming Avengers 4.

But for right now, fans will just have to settle for a fun little Easter egg.