Home » Celebrities » ‘Avengers: Infinity War’ May Have Done More Damage To The Characters Than You Thought

If you have seen Avengers: Infinity War, then you know that shocking deaths are a big part of the new movie, but there may have been even more character deaths than we actually saw. Namely, a favorite from Thor: Ragnarok might have been killed… even though we did not actually see it happen. So, what’s going on here: Did Valkyrie die in Avengers: Infinity War or not? Let’s get into the confusing question.

Spoiler alert: This post is going to discuss plot points from Avengers: Infinity War, so don’t keep reading if you’re avoiding spoilers. Okay, so really, the big question about Valkyrie comes into play right in the first scene of Infinity War. The new movie opens with Thanos on board the Asgardian refugee ship, picking up immediately after the Thor: Ragnarok post-credits scene that showed his ship descending on the newly homeless Asgardians. In the scene, we see Thanos — having just obtained the Power Stone from Nova Corps — showing off his might by defeating Thor and the Hulk, and then killing every Asdardian in sight. That includes two shocking major character deaths right off the bat: Thanos kills Heimdall after the Bifrost operator used his powers to transport the Hulk down to Earth for safety, and then he strangles Loki to death when the trickster god attempts to sneakily stab him. Finally, Thanos gets the Space Stone from Loki and leaves the ship, blowing it up with the Power Stone as he goes.

Luckily, Thor was able to survive the explosion (he is a god after all) and the Guardians of the Galaxy happen upon him drifting in space, but the rest of Asgard is not so lucky. With Asgard destroyed at the end of Thor: Ragnarok and the refugee ship destroyed at the beginning of Infinity War, it really seems like Thor may be the last remaining Asgardian alive in the universe. And yeah, I guess that even includes Valkyrie, right? 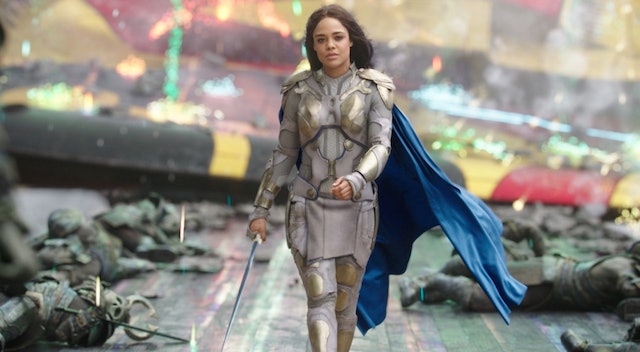 Tessa Thompson’s badass and boozy warrior was one of the best parts of Thor: Ragnarok, and so many Marvel fans were excited to see more of Valkyrie in future movies, but her prospects do not look so good after the events of Avengers: Infinity War. When we last saw Valkyrie, she was on board that Asgardian refugee ship with the rest of them, but she did not appear once in Infinity War.

The new movie definitely made it seem like the Hulk and Thor were the only two survivors of Thanos’s attack on the Asgardians, especially after blowing up the entire ship! Presumably, Valkyrie was still on that ship when that happened, and she is now dead.

But then again, Thor managed to survive the explosion — maybe Valkyrie also made it to safety somehow? Tessa Thompson seemed to hint that her character might have survived the attack on Twitter; when a fan wondered where Valkyrie and fellow missing Marvel star Hawkeye were in Infinity War, Thompson joked that they were chilling at a bar.

Although Thompson’s joke didn’t actually clarify much about Valkyrie’s fate, an interview she did with IGN after Thor Ragnarok‘s release may be more insightful. In the interview, Thompson said that she believes there may be interest in Marvel staging an all-female movie sometime soon, pairing Valkyrie, Black Widow, Okoye, Shuri, Scarlet Witch, and Captain Marvel. If that interest is still there, then Marvel will probably find some way to explain how Valkyrie could have survived Thanos’ attack. Plus, would they really kill of Valkyrie off-screen, without even mentioning her at all? I don’t think so.

Still, there really does not seem to be any valid explanation as to how Valkyrie could have survived Thanos’ attack right now. We’ll just have to hope Marvel figured out some way to save her.