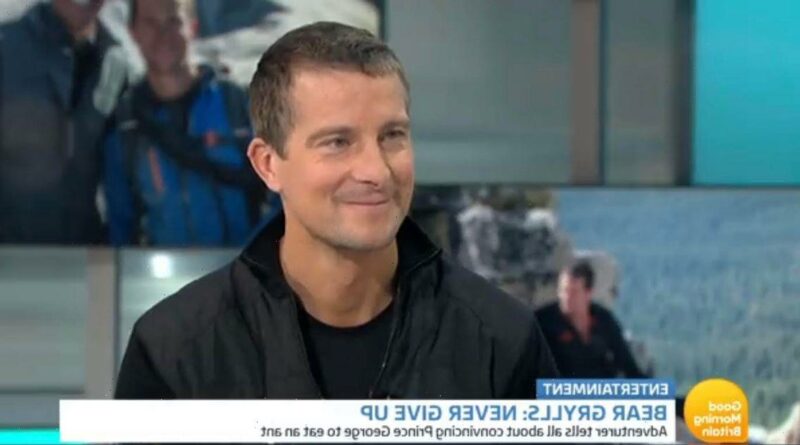 TV viewers have seen him drink his own wee and bite into a snake, but Bear Grylls has revealed one of the most memorable moments of his career was when he encouraged Prince George to eat ants.

Bear, 47, opened up about his bizarre Royal encounter, as he recalled meeting the future King after Kate Middleton’s mum Carole said George was a “big fan” of the adventurer.

Speaking on today’s Good Morning Britain with co-hosts Susanna Reid and Martin Lewis, Bear laughed as he explained: “Well, I didn’t really mean to. We were doing something at Prince William’s King’s cup event. We were down there and the Royal family were there.”

He continued: “It was actually the Duchess of Cambridge’s mother who said, ‘would you just come and say hi to Prince George? He’s a big fan of your Netflix, interactive show.”

Shortly afterwards, the pair were introduced and Bear began chatting to George – before challenging the little Royal.

“He looked at me with those amazing little wide eyes and I said, ‘come on, we’ve got to eat one!’”

Understandably, George was surprised at Bear’s request, as the adventurer continued: “He said, ‘Really?!’ And then he ate one.”

“It was a privilege to give the future King his first ant and his eyes lit up as they do with anyone when they’re out in the wild and they face a few fears and overcome them.”

Bear went on to describe George as a “hero”, as Susanna grilled him on what ants taste like.

The dad-of-two answered: “They’re a little zingy but that’s a formic acid in the stomach and it’s all Vitamin C so it’s ok.”

However, it doesn’t seem that Bear has convinced her to give it a try as she joked that she didn’t think her and money expert Martin were “missing out.”

During his appearance on the ITV morning show, Bear also reminisced about filming his show Running Wild alongside former President Barack Obama – including feeding him a half-eaten salmon that had been started on by bears.

He said: “I grabbed one and thought, ‘this is going to be perfect for us to have for lunch.’ But the secret service said, ‘No. First of all, he never eats on camera or drinks, if we do that we’ll have to have a special salmon ready.’”

“But the President was great. We sat down, made a fire, a cup of tea and I pulled out this thing and started cooking it.”

For all the latest Royal news, sign up to OK! newsletters here. Good Morning Britain continues weekdays at 6am on ITV