Home » Celebrities » Bella Hadid and The Weeknd Are Officially a Couple Again, and They Attended Kylie’s 21st Together 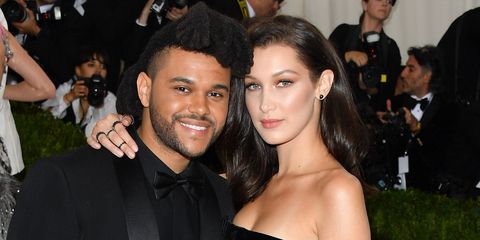 After months of speculation regarding the status of their relationship, it appears that Bella Hadid and The Weeknd are now officially back together.

According to a new report in Us Weekly, a source confirms that the on-off couple are most definitely back on, and that they’re “so great with each other.” As for whether or not they’ve worked out any of their past issues, an insider tells the publication that Hadid and Abel Tesfaye “are great and happy together now.” It seems as though they’re giving their relationship another go, and they couldn’t be happier about it.

The report comes the day after Hadid and The Weeknd attended Kylie Jenner’s 21st birthday party together. They were allegedly spotted being “very cute together” at the party, which included a pink ball pit, a Barbie-themed cake, and literally every member of the Kardashian-Jenner clan wearing a stunning outfit.

Abel and Bella even took photos in the party’s photo booth together, only further confirming that they can’t stay away from one another:

The Weeknd also captured footage of Bella hanging out with fellow model Kendall Jenner at the party, which he shared on his Instagram Stories:

Just last month, Hadid and Tesfaye were spotted on a date in Tokyo together, with a fan sharing footage of the couple on social media. They attended Tokyo’s famous robot restaurant, and The Weeknd shared a clip on Instagram which clearly showed Hadid sitting next to him, enjoying the show.

Rumors of a reunion started earlier this year when Bella and Abel were seen kissing at a Coachella afterparty.