‘Thank you for that last night’s storm’: Made In Chelsea star Binky Felstead, 27, reveals her 11-month-old daughter India’s nursery is ‘ruined’ after their London home floods while they are on holiday

Made In Chelsea Star Binky Felstead has revealed how flooding has ruined her young daughter’s nursery at her London home.

The reality star, 27, returned from a holiday in the Isle of Wight today to find the house she shares with her partner Josh Patterson devastated by flash floods.

Images of her 11-month-old daughter India’s play room show a thick layer of water and brown sludge covering the floor.

She told fans the nursery was ‘ruined’ after water flooded into the lower floor of her property during the ‘mother of all thunderstorms’ across the country on Saturday.

The Met Office has issued yellow weather warnings for large parts of the country until Monday mornings after the overwhelmingly wet weekend. 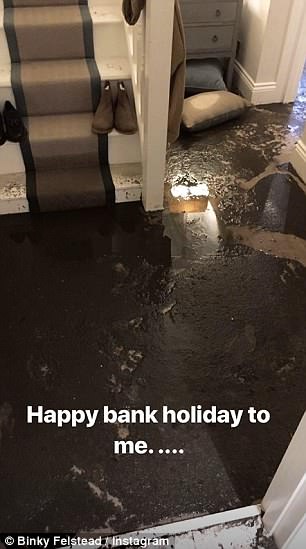 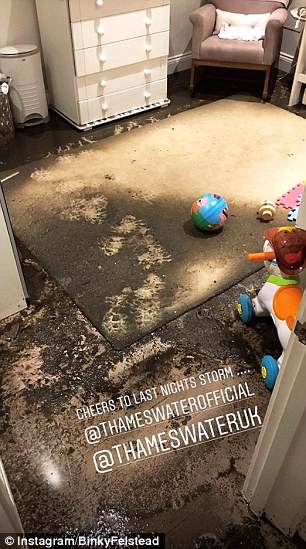 Ruined: The former Made In Chelsea star shared photos on Instagram on Sunday of flood damage at her house in the capital 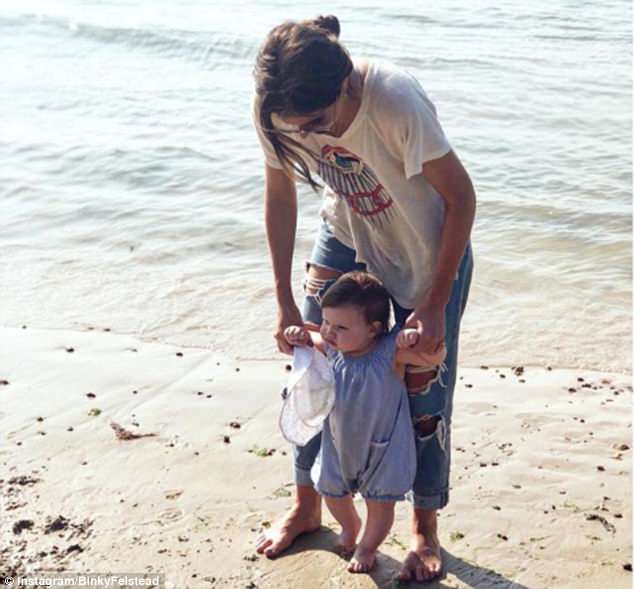 Break: Binky has been holidaying on the Isle of Wight with her daughter and friends over the weekend, while Josh is working on a photoshoot in Capri, Italy

Binky had been holidaying on the Isle of Wight with her daughter and friends over the weekend, while Josh worked on a photoshoot in Capri, Italy.

But while the family were away, their recently renovated house suffered severe damage.

Taking to Instagram on Sunday afternoon, Binky shared a happy picture of her daughter playing in the sunshine on holiday, only to reveal in the caption the ‘nightmare’ that awaited them back home.

‘At least someone has no idea of the nightmare that’s going on back at ours … her nursery is ruined as is all of the bottom floor of our place. Thank you for that last nights storm.’

In photos of the house shared on her Instagram stories, thick black mud and water can be seen covering the floor of the hallway and India’s room, with the carpet and the baby’s toys destroyed. 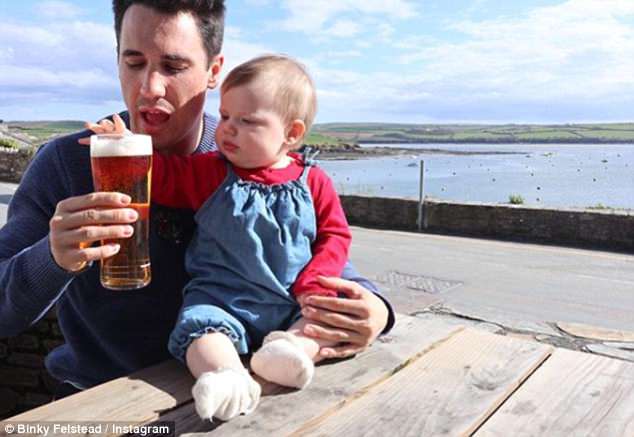 Family home: Binky shares the London pad with her partner Josh Patterson, who is away working in Italy, and their daughter India, eleven months 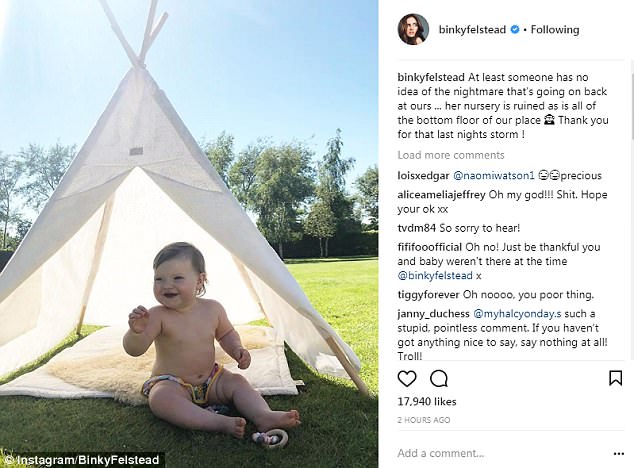 Upsetting: Taking to Instagram on Sunday, Binky shared a happy snap of her daughter India playing on holiday, only to reveal in the caption the ‘nightmare’ that awaited them back home

Binky captioned one of the photos: ‘Happy bank holiday to me,’ while the nursery snap was accompanied by the words: ‘Cheers to last night’s storm.’

The reality star also took to Twitter to plead with Thames Water to help her, sending the message: ‘Sorry @thameswater getting worried no one is going to show up … can you let me know how long you’re going to be to sort this out.’

A representative for Binky has been contacted by MailOnline for comment. 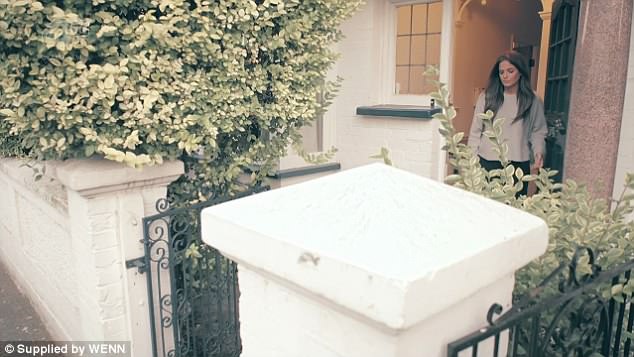 Made In Chelsea star Binky Felstead is pictured leaving her London home, which has this weekend been devastated by flash flooding and heavy rain

More than 62,000 lightning bolts struck Britain on Saturday night in the ‘lightning show of a lifetime’.

BBC weatherman Tomasz Schafernaker tweeted about the dramatic conditions in the capital: ‘Mother of all #thunderstorms now over London. Oh boy! This is utterly insane.’

He added: ‘That was one adrenaline-gagging-meteorologically-sickening-bonkers-conkers-electrifying sky show. I’ve never seen a storm with such frequent lightning in my life.’ 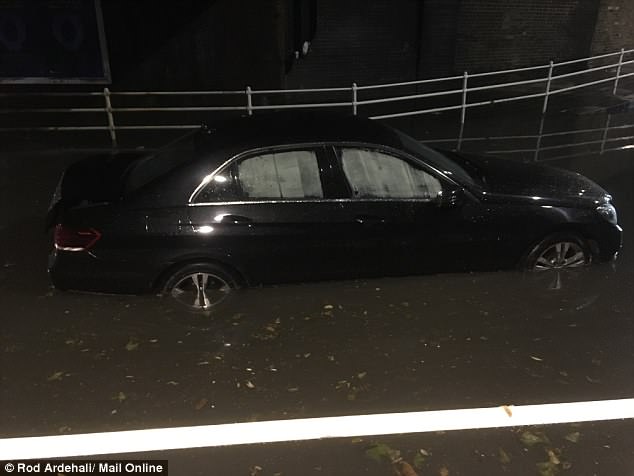 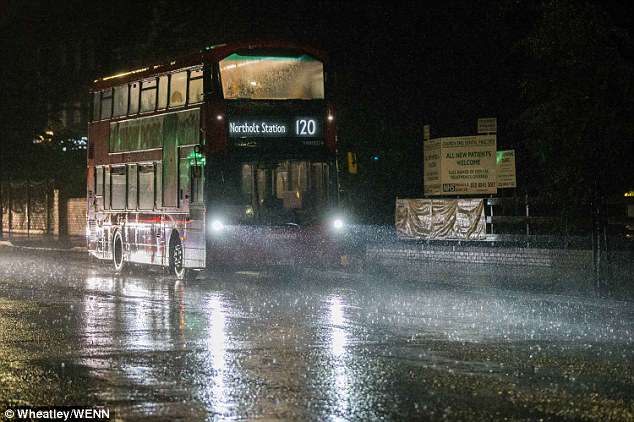 The Met Office has issued a yellow rain warning between 12am on Sunday and 6am on Monday. Pictured: Thunderstorms & torrential rain over Northolt in west London 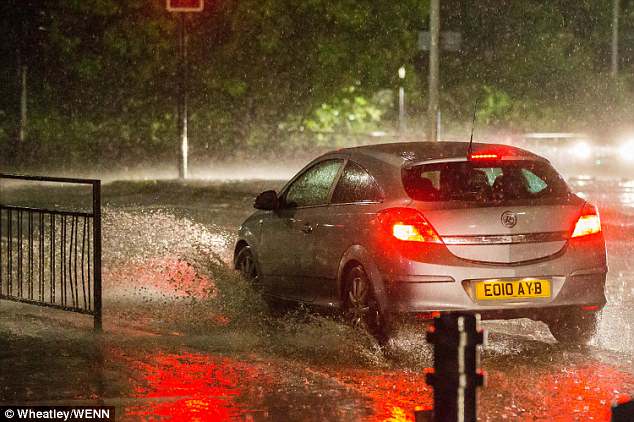 Pictured: A car splashing through large puddles on the road in Northolt in north west London 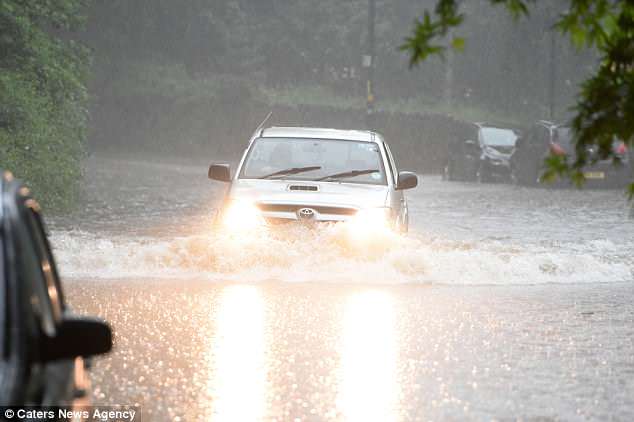 Flash flooding has devastated parts of the UK this weekend. As torrential rain fell in Birmingham yesterday  many roads became unpassable (pictured)

The London Fire Brigade said it had taken more than 500 weather-related calls as the warm and humid bank holiday weather broke down into an ‘utterly intense’ storm.

In Birmingham traffic came to a standstill and roads were made impassable by heavy rain.

Binky previously revealed she completed work on India’s nursery a matter of days before her daughter’s birth on June 12 last year.

Writing in her HELLO! column before the birth, the star revealed the stress of having her and Josh’s home renovated while she was pregnant.

‘I’m actually in a bit of a dilemma, my house should have been ready a month ago and we still have builders in there finalising things which is very stressful and very last minute, she told her fans.

‘Josh has got a property building and developing background so he’s trying his hardest to help as much as he can but it’s just one of those things. Never get your house renovated when you’re having a baby! It’s been a real nightmare.’