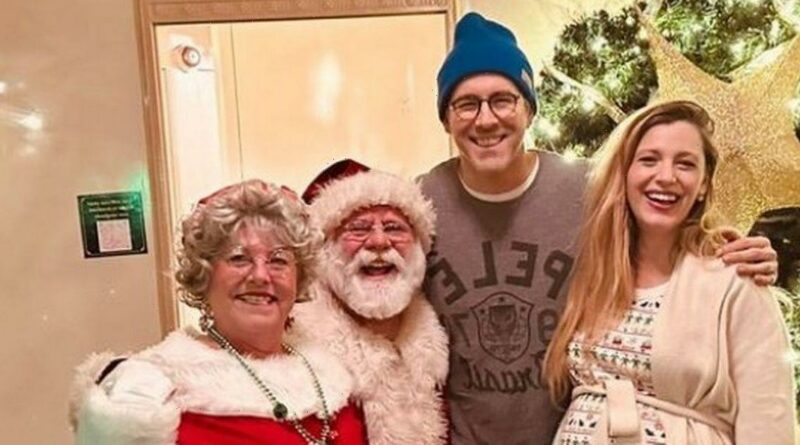 Gossip Girl star Blake Lively has showcased her blossoming baby bump as she poses for a sweet Christmassy snap with husband Ryan Reynolds.

The Deadpool star, 46, shared the snap of himself and Blake, posing alongside Santa and Mrs Claus, who he dubbed 'Jessica'.

The soon-to-be parents of four, were all smiles, as Blake, 35, showed off her baby bump while sporting some comfy Christmas themed pyjamas, and a cream coloured dressing gown.

Meanwhile, Ryan donned some black trousers, a grey jumper and a blue beanie hat. Captioning the sweet snap, he wrote: "We met Jessica Claus and her husband on the Polar Express.

"She was everything I’d always dreamed since I was a kid. She smelled like cinnamon buns and sangria."

Noticing the way the photo was cropped, cutting off her feet, Blake hilariously commented: "My. Shoes" followed by an annoyed emoji.

Responding to his wife's complaint, Ryan shared the full uncropped photo to his Instagram story, writing: "I cropped my wife's shoes out in the photo I posted.

"It's inexcusable and I'm sorry to anyone I've hurt with this callous lack of fortitude. Heading to the hospital to have my brain weighted."

Blake and Ryan announced that they are expecting their fourth child earlier this year, when Blake showed off her bump at the 10th Annual Forbes Power Women's Summit.

The couple met on the set of Green Lantern over a decade ago, and went on to tie the knot in 2012.

In light of their years of happy marriage, the actor disclosed their secret to success.

Speaking to ET last year, Ryan said the reason his relationship is so successful is that he and Blake were friends before they got together romantically.

Ryan said: "We don't take each other too seriously, but we're also friends.

"Falling in love is great, but do you like each other? That's kinda the question you gotta ask yourself, you know, going into it."

He continued to say that the pair keep things fresh as they "learn" from each other.

He added: "We've always liked each other. We grow together. We learn from each other. So yeah, I'm lucky to have a buddy in that."