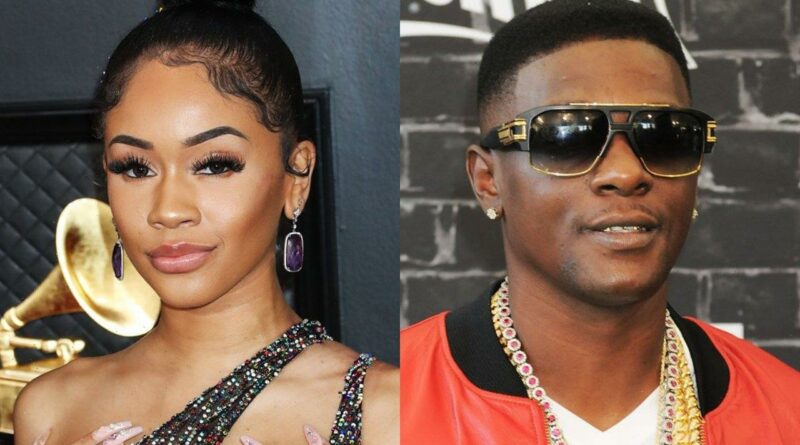 The ‘Wipe Me Down’ rhymer suggests that the ‘Icy Girl’ raptress may have had work done on her butt while he is amazed by her and Yung Miami’s twerking skills.

AceShowbiz -Boosie Badazz a.k.a. Lil Boosie is apparently keeping his eyes on Saweetie. The Baton Rogue native was apparently attracted to one of the raptress’ recent racy videos and he couldn’t hide his curiosity about her certain asset.

On Wednesday, December 15, the “Icy Girl” hitmaker posted on her Instagram page a video showcasing her twerking skills. In the clip, she was joined by two dancers performing some choreographed routine before busting into the booty-shaking moves.

Apparently falling into the thirst trap, Boosie made public his inquiry about Saweetie’s butt while praising her twerking skill. “IS @Saweetie ASS REAL ?” he asked to her on Twitter, suggesting that the raptress may have had plastic surgery to enhance her butt.

“CAUSE THAT MF BE MOVING LIKE AINT NO BBL BEEN DONE BACK THERE I GOTTA KEEP IT A [100 emoji] THAT S**T BE GOING CRAZY BACK THERE,” Boosie added. He also gave a shout out to Yung Miami as writing, “N @YungMiami305 YALL KILLING THE TWERKING GAME !!”

Asides from black women, Boosie recently admitted that he also likes white girls, though he is very particular when it comes to the type of white women that he likes. “I wouldn’t say dated, but I’ve had a couple of white girls,” he said when asked if he has ever dated white women. “I love my Black women, but you know, I’m attracted to white girls also.”

The father of eight went on to explain that he likes white girls who are authentic to their cultural roots, saying, “I like the real ‘Baywatch‘, the real white girls. High school white girls, who just pretty and beautiful you know? The long backs. With that little booty – that b***h s**t though! And when it comes out the draws it’s bigger than what it look. You know what I’m talking about, Vlad!”