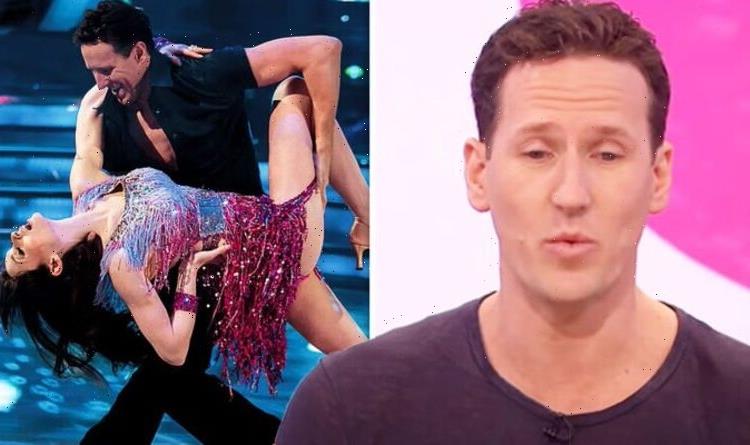 Brendan Cole, who is gearing up for Sunday night’s Dancing On Ice, has said it became “tiring” after being seen as “competitive” on the BBC show. The professional dancer said he was only able to “show one side of him” during his 15 year stint on Strictly Come Dancing.

Brendan will go up Pussycat Doll Kimberly Wyatt and Regan Gascoigne in the upcoming final, who also have professional dance experience like the former Strictly pro.

The on-screen star has since said his reasoning for appearing on ITV’s Dancing On Ice was in a bid to show another side of his personality.

Addressing his time on Strictly, Brendan explained: “I came on the show [Dancing On Ice]hoping to show another side to me. Strictly only wanted to show one side to me.

“And they really pushed that side of me. There was very much a narrative that the show went with for 15 series. And it was tiring because it was actually not me.

He added: “I muck around a lot and that wasn’t shown very often and I think it has been shown more on this show.”

The New Zealand-born professional dancer admitted that he is only “competitive” with himself adding that at times he became “p***ed” at himself.

Brendan began as a dancer with the original Strictly cast in 2003.

He was the first-ever professional to win the Glitterball trophy with Natasha Kaplinsky and was there for 15 years.

The BBC champion said: “I am not actually fiercely competitive, I am competitive with myself.

“If I get something wrong or I am not where I’m meant to be I get immensely p***ed off with myself.”

The amateur skater added to Mail Online: “I am only competitive with myself, if I lose or win it doesn’t matter, but it is always nice to win!”

Meanwhile, the professional dancer will take to the ice for the final time at the weekend.

The contestants will each skate different routines before judges Jayne Torvill and Christopher Dean, Ashley Banjo and Oti Mabuse, and the remaining two will get to show off their versions of the Bolero.

The show’s final was expected to be on 20 March but was delayed by a week because of football airing on ITV.

Sunday’s final comes amid rising Covid cases in the UK again but there are hopes among the last three contestants that everything will run smoothly this weekend.

It comes after Dancing On Ice presenter Holly Willoughby was forced to pull out of the show after testing positive for Covid a two weeks ago.

Brendan will hope to be lifting the trophy as he takes to the ice with partner Vanessa Bauer.

Dancing On Ice final airs Sunday on ITV at 6pm.