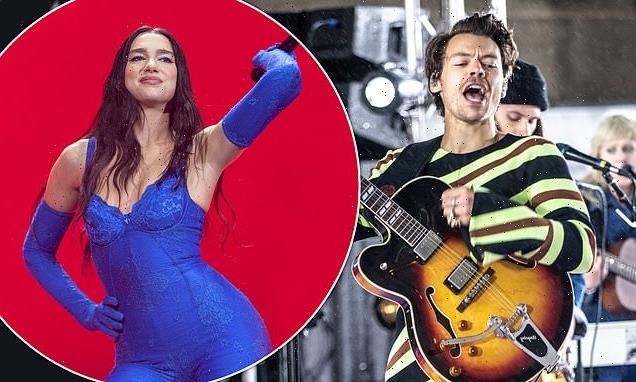 The BRIT Awards 2023 nominations have been revealed with Harry Styles, Dua Lipa and Sam Smith leading the hopefuls ahead of the ceremony on February 11.

Stars will battle it out for the coveted awards in the live ceremony next month at London’s O2 Arena, with Harry and Wet Leg leading the pack with four nods each.

But in a surprise snub, female artists were shut out of the Artist Of The Year, which last year introduced a gender-neutral overhaul by scrapping its male and female-centric categories. 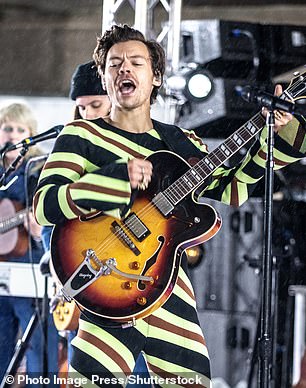 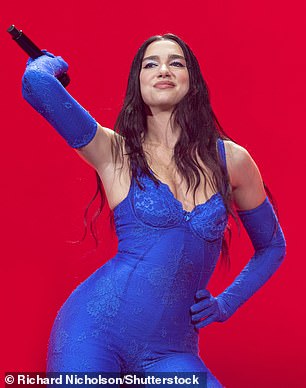 Big names! The BRIT Awards 2023 nominations have been revealed with Harry Styles (left), Dua Lipa (right) and Sam Smith leading the hopefuls ahead of the ceremony on February 11

The category saw snubs for artists including Dua Lipa, Charli XCX and Florence & The Machine, despite Adele scooping the top prize last year, the first time it introduced its gender-neutral overhaul.

In 2021, the BRIT Awards announced that they would be abolishing its male and female categories, in bid to celebrate artists ‘solely for their music.’ 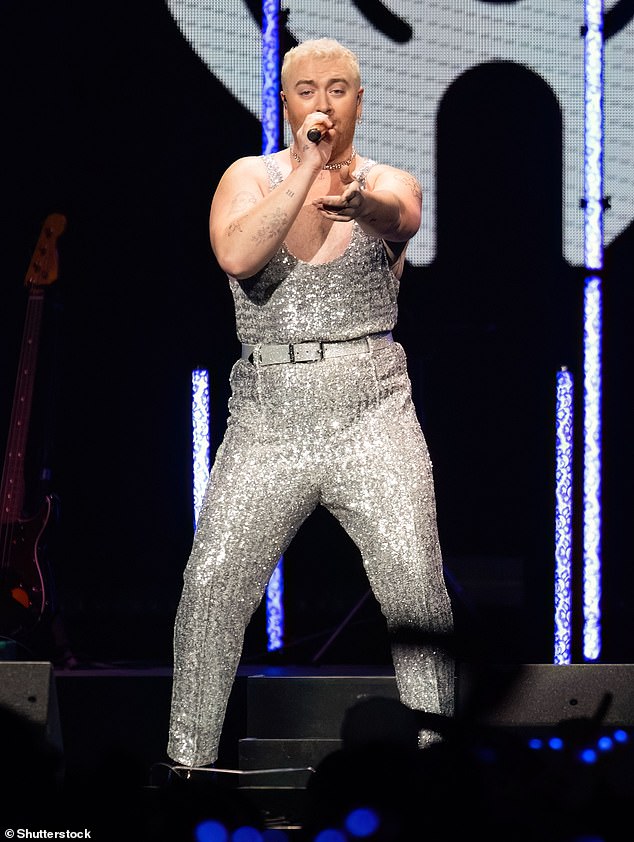 Up for an award: Sam Smith, who led calls for the awards to scrap its gender-focused categories, has been nominated for Pop/R&B Act, and Song Of The Year 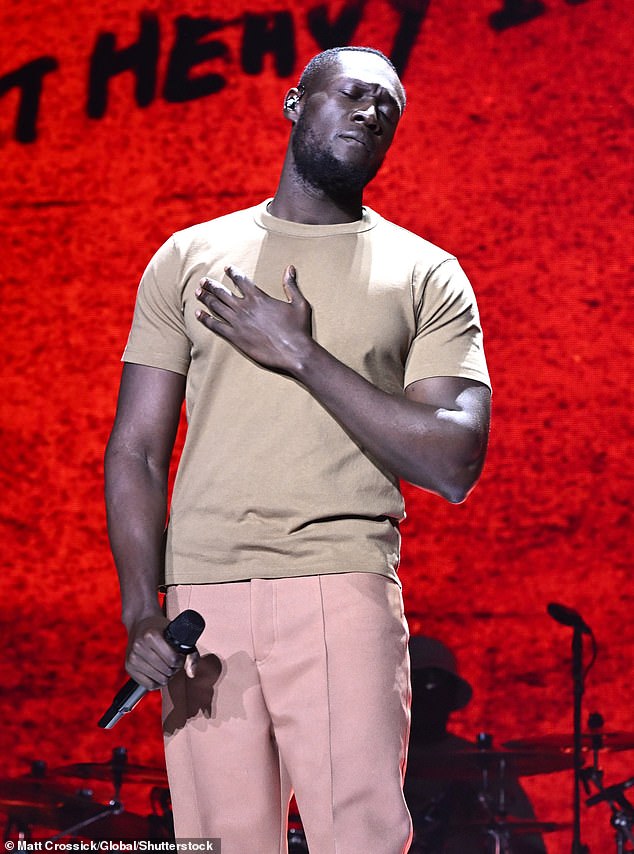 Stellar: Stormzy has also landed nominations for Album Of The Year, Artist Of The Year, and Hip Hop/Grime/Rap Act

Meanwhile, set to compete for the coveted Mastercard Album Of The Year are The 1975 with Being Funny In A Foreign Language, Wet Leg with their self-titled album and Harry Styles with his hit compilation Harry’s House.

Also nominated is Stormzy with his album This Is What I Mean, and Fred Again, with Actual Life 3 (January 1 – September 9 2022).

Meanwhile the coveted category Song Of The Year With Mastercard, are Aitch with Baby Ft Ashanti, Cat Burns with Go, Dave with Starlight, and Ed Sheeran And Elton John with their festive hit Merry Christmas.

Also nominated are Eliza Rose And Interplanetary Criminal with Baddest Of Them All, George Ezra with Green Green Grass and Harry Styles with As It Was.

Mastercard Album Of The Year

The 1975 – Being Funny In A Foreign Language

Stormzy – This Is What I Mean

Artist Of The Year

Group Of The Year

Song Of The Year With Mastercard

Eliza Rose And Interplanetary Criminal – Baddest Of Them All

Harry Styles – As It Was

International Artist Of The Year

International Group Of The Year

International Song Of The Year

Calum Scott And Lost Frequencies – Where Are You Npow

One Republic – I Ain’t Worried 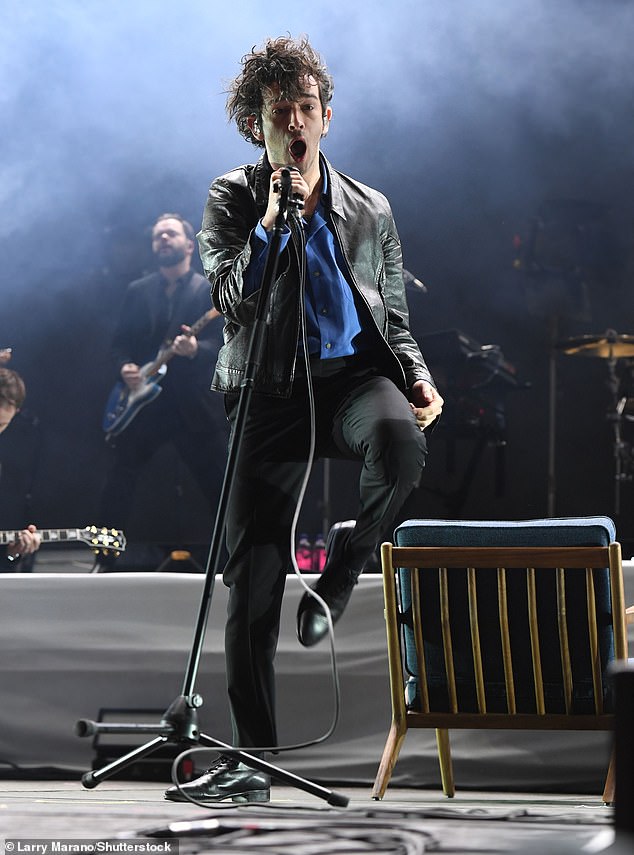 Showmen: The 1975, fronted by Matty Healy, landed three nominations, Album Of The Year, Group Of The Year and Best Alt Rock

Concluding the Song Of The Year nominations are Lewis Capaldi with Forget Me, Lf System with Afraid To Feel, and Sam Smith And Kim Petras with Unholy.

Speaking after his nods, George said: ‘It’s amazing to be nominated for two BRIT Awards and very flattering. Thank you to everyone involved. The news made me smile and excited for the year ahead.’

Meanwhile Lewis added: ‘It’s an honour to be nominated for British Song Of The Year. I very much look forward to seeing Harry Styles accept the award for As It Was.’ 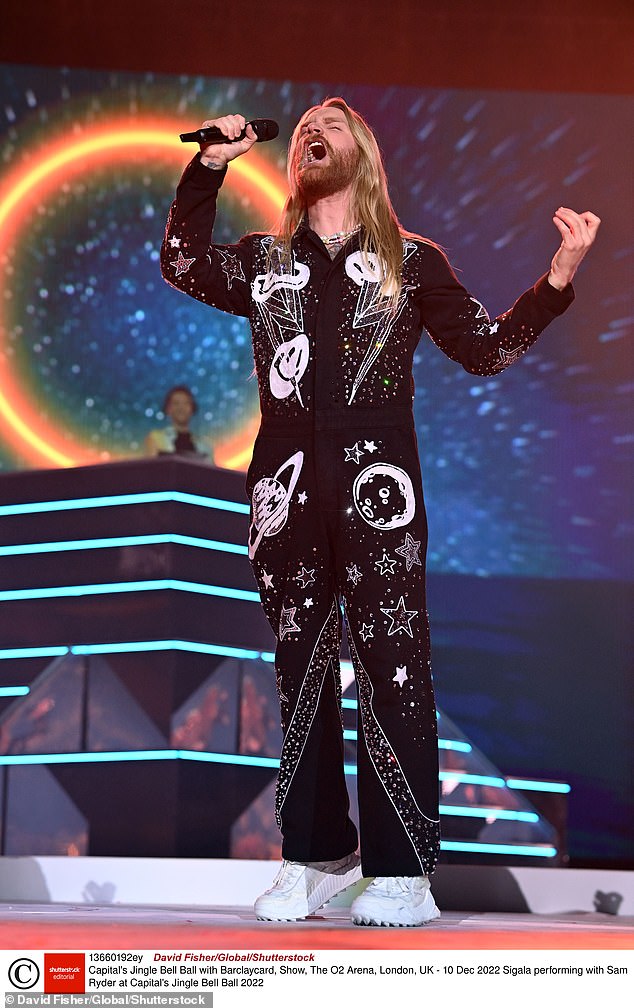 Following his meteoric rise to success in 2022 after helping the UK to a second-place finish in the Eurovision Song Contest, Sam Ryder has been nominated for Best New Artist.

He will compete against Kojey Radical, Mimi Webb, Rina Sawayama and Wet Leg.

Sam said: ‘I’m buzzing! I feel like a Golden Retriever that’s won a medal. Whatever happens, to simply be recognised alongside so many amazing artists and peers is incredible. For me this is truly a reflection of what it’s all about – the music.’

Meanwhile a delight Mimi said: ‘Being nominated for a BRIT Award is something I’ve been dreaming about since I was eight years old and I am so, so grateful. I can’t wait to attend and see my name alongside all the other incredible nominees – it will be a real ”pinch me” moment.

‘I remember seeing Dua Lipa win Best New Artist in 2018 and being in awe of her – that moment really inspired me to work hard and be the artist I am today. I am so grateful for all the love and support of those who have helped me get here – it feels so much better than I ever imagined.”

Up for Group Of The Year are The 1975, Arctic Monkeys, Bad Boy Chiller Crew, Nova Twins and Wet Leg, while International Group Of The Year saw nods for Black Pink, Drake And 21 Savage, First Aid Kit, Fontaines Dc and Gabriels.

Speaking after their four nods, Wet Leg said: ‘Somebody hold our horses while we get to grips with this wild news, being nominated for a BRIT award is too hard to comprehend, we never could have expected for our wee band to achieve this.’

Stormy has landed another node in the Hip Hop/Grime/Rap category, competing against Aitch, Central Cee, Dave and Loyle Carner.

Becky Hill has once again landed a nomination in the Dance Act category, having previously scooped the prize last year.

She is nominated against Bonobo, Calvin Harris, Eliza Rose and Fred Again.

Speaking after the nod, she said: ‘I am astounded that I am nominated for Best Dance Act for a second year in a row.

‘I am so honoured to be recognised again for my contribution in dance music which is held so closely to my heart.

‘As a fan of dance music my entire life, to be seen in this respect is truly heart-warming & this is a really humbling moment for me. Thank you so much, I can’t wait to be back at the BRITs as a nominee for 2023.’

And, following the reissue of her Future Nostalgia album, Dua has been nominated in the Pop/R&B category, opposite Harry, Sam, Charlie XCX and Cat Burns.

Elsewhere, in the International Categories, Beyonce once again reigns supreme with two nods, alongside Taylor Swift and Lizzo.

Up for International Artist Of The Year are Beyonce, Burna Boy, Kendrick Lamar, Lizzo and Taylor Swift.

Many of these nominees are also recognised in the International Song Of The Year category, with Beyonce up for her viral hit Break My Soul.

Also landing a surprise nod are the team behind the hit We Don’t Talk About Bruno from the Disney animated hit Encanto.

Up for Internationl Song Of The Year are Gayle with Abcdefu, Jack Harlow for First Class, Lizzo with About Damn Time, and Calum Scott And Lost Frequencies with Where Are You Now.

Rounding out the nods are One Republic with I Ain’t Worried and Taylor Swift with Antihero.

In December, The BRITs announced the winner of this year’s Rising Star supported by BBC Radio 1 award as FLO, the first ever group to win this award.

They join the list of incredible artists who have won the award in previous years including Adele, Florence + The Machine, Sam Smith, Ellie Goulding, Emeli Sandé, Griff, and last year’s winner, Holly Humberstone.

The winners of the four genre categories – Rock/Alternative Act, Hip Hop/Grime/Rap Act, Dance Act, Pop/R&B Act – will be determined by a public vote via TikTok, which will open on Thursday 19th January at midday.

Vick and Jack enlisted the help of a team of celebrities to help announce this year’s key categories.

Olympian Tom Daley, YouTube’s Yung Filly, Euro 2022 winner Jill Scott and Gogglebox’s Joe and George Baggs were among the names revealing this year’s nominations across their own social channels.

The celebrities were handed locked BRITs boxes to keep safe before revealing their categories on the day of the live stream.

The BRIT Awards 2023 with Mastercard will take place on Saturday February 11 – the first time the show will be held on a Saturday in its history – and will broadcast live on ITV1 and ITVX – from The O2 arena.

Mo Gilligan will return as host for the second time.

The Masked Dancer judge Mo said: ‘Hosting the BRITs last year was one of the most phenomenal moments of my life.

‘I’ve been so honoured to get to know the incredible team behind the biggest night in music and so proud to bring our amazing audiences even closer to their favourite artists. I promise you, we’re going to go even bigger this year… Let’s go.’

This year the BRIT award has been designed by Slawn, the Nigerian-born, London-based artist who follows in the footsteps of an illustrious list of creatives including Dame Vivienne Westwood, Sir Peter Blake and Tracey Emin. 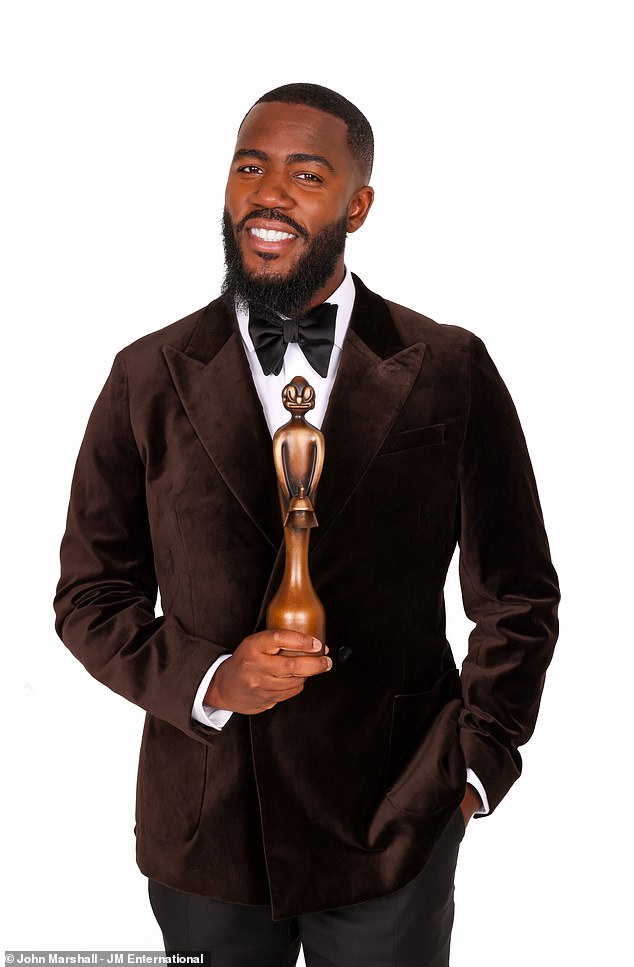 Taking the helm: Mo Gilligan will return as host of this year’s BRIT Awards

The BRITs have already announced their first winner – R&B girl group FLO are the recipients of the 2023 Rising Star award.

The singer won the first ever genderless Artist Of The Year gong after the male and female categories were scrapped.

However, she hit back at the ‘woke’ ceremony as she insisted in her acceptance speech that she ‘loves being a female artist’, after bosses bowed to calls to rid the awards of gendered categories. 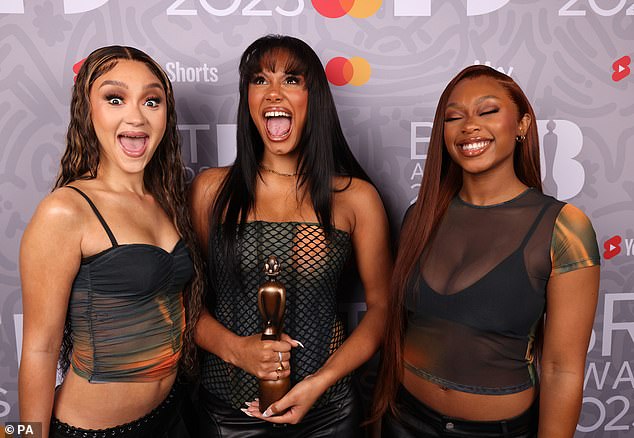 Delighted: R&B girl group FLO have already been announced as the winners of the 2023 Rising Star award, celebrating another future star of British music

The BRIT Awards sparked controversy after ditching the traditional male and female categories and switching to gender-neutral gongs for the first time in its history, causing naysayers to brand the event ‘woke’.

Organisers divided opinion and some were left outraged by the decision to switch to gender-neutral gongs for the first time in its history, in calls led by non-binary singer Sam.

Bosses claimed the move was in a bid ‘to be as inclusive and as relevant as possible’ and allowed people to enter who do not identify as a man or woman.

But fans at the time blasted the change as ‘woke drivel’ at the time, with many calling for a boycott.

The 2023 BRIT Awards will take place on Saturday, February 11 at London’s O2 Arena. They will be broadcast on ITV1 and ITVX. 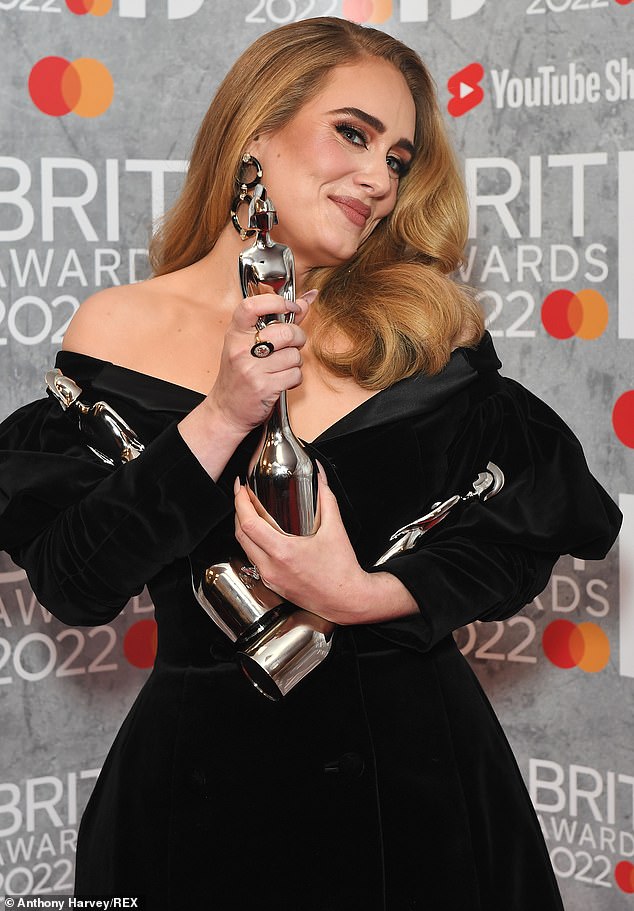 The winner takes it all: Adele swept last year’s BRIT Awards as she took home three gongs at the first ever gender neutral ceremony