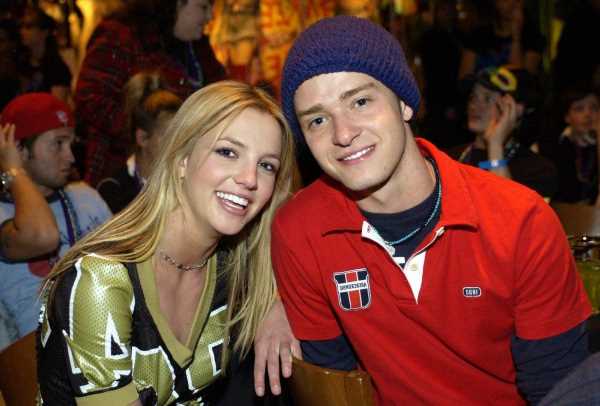 Britney Spears continues to cause a frenzy with her Instagram posts. After sharing uploads of her posing topless and gushing over her first iPad, the singer has taken to the online platform once more to quote her famous ex-boyfriend, Justin Timberlake — and fans can’t seem to keep their cool over this mention.

Britney Spears referenced Justin Timberlake in a post about a cat

With many former celebrity couples reuniting nowadays, fans can’t help but get excited at the mention of their favorite duos — even if it has nothing to do with love.

On Aug. 17, the “Gimme More” singer posted a peculiar photo to Instagram with a caption quoting her famous ex.

The snapshot, which Spears likely found on the internet, was of a woman cuddling with a gigantic gray and white cat while lounging on a couch.

Spear captioned the post, “As JT would say … haters gonna say it’s fake !!!!! I MEAN … wow I have no idea … what do you guys think ???? I’ve always liked small kittens … although big cats are extremely smart they always sort of scared me !!!!!!”

As expected, fans freaked out over the post and immediately flooded the comments with their reactions to Spears’ “JT” reference.

“JT?? JUSTIN TIMBERLAKE??,” one user commented. “Did you just quote your ex?? I’m here for it!” someone else wrote.

Meanwhile, some fans instantly jumped to conclusions by speculating that a Britney and Justin collaboration is coming.

“JT collab confirmed,” someone penned, while another wrote, “I’m off JT’s wagon, but if you guys collabed, I would hop back on so fast.”

Spears’ Timberlake reference comes six months after their past relationship was back in the spotlight following the release of the critically acclaimed Hulu documentary Framing Britney Spears.

The film, which was released in February, detailed the singer’s rise to fame while highlighting the mistreatment and misogyny she faced at the hands of not only the paparazzi but those around her.

While the documentary heavily covered all that led up to Spears’ highly controversial conservatorship and the #FreeBritney Movement, it also shined a light on her very public romance with Timberlake, whom she dated from 1999-2002.

Britney Spears and Justin Timberlake’s relationship was one of the most talked-about elements of the documentary as it highlighted the poor way the former *NSYNC frontman treated Spears after they called it quits. Many accused Timberlake of playing the victim and publicly pushing the narrative that Spears had cheated on him to boost his own career.

Following the film’s release, the “Mirrors” singer received a ton of backlash, with many demanding that he apologize to Spears.

It wasn’t long after that Timberlake fulfilled fans’ request by sharing a statement on Instagram in which he expressed remorse for his past actions.

“I am deeply sorry for the times in my life where my actions contributed to the problem, where I spoke out of turn, or did not speak up for what was right,” the statement read. “I understand that I fell short in these moments and in many others and benefitted from a system that condones misogyny and racism.”

Justin Timberlake has been advocating for Britney amid her conservatorship battle

Since making his public apology, Justin Timberlake hasn’t shied away from making his feelings about Britney Spears’ current situation known.

In June 2021, the hitmaker — along with plenty of other celebrities — declared his support for Spears after she described her conservatorship as “abusive.”

In a lengthy post shared to Twitter, Timberlake expressed disdain for Spears conservatorship, sharing that no one should be subject to such treatment.

“After what we saw today, we should all be supporting Britney at this time,” he wrote. “Regardless of our past, good and bad, and no matter how long ago it was… what’s happening to her is just not right. No woman should ever be restricted from making decisions about her own body.”

Timberlake added, “No one should EVER be held against their will… or ever have to ask permission to access everything they’ve worked so hard for. Jess and I send our love, and our absolute support to Britney during this time. We hope the courts, and her family make this right and let her live however she wants to live.”