Watch her go! Britney Spears looked so happy as she boogied to the a funk classic by James Brown in a holiday ready gown.

Britney Spears is seemingly ready for Christmas! The freshly minted 40-year-old showed off her dance moves to “Super Bad Pts. 1, 2, & 3” by James Brown in her latest Instagram video, posted to the platform on Thursday, Dec. 9. She looked incredible as she wore a sparkly silver one-shoulder gown that featured an ultra-high slit on the right side. The gown was adorned with festive feather details, tying into her crystal necklace.

She finished the look with a pointy pair of black suede pumps, and rocked her signature makeup with plenty of black eye liner and smokey shadow. The Louisiana native kept her blonde hair down for the video, which appeared to be filmed in an ornate living room. A Persian rug could be seen behind her, along with with a festive Christmas tree and arranged, neutral-colored sofas. “James Brown … enough said !!” Britney simply captioned the short post.

The latest dance video comes just a day after she modeled several videos while dancing to a cover of ex-boyfriend Justin Timberlake‘s song “Sexy Back” by Ilkan Gunuc and Clara Stegall. No caption was necessary on the video, which included her trying on two festive white mini dresses. One fan joked, “Justin has Britney on payroll.” While the pair haven’t had much interaction since their split in 2001, Britney has revealed she’s still a fan of his music! In past videos, she boogie to his songs songs “Blue Ocean Floor” as well as “Filthy.” 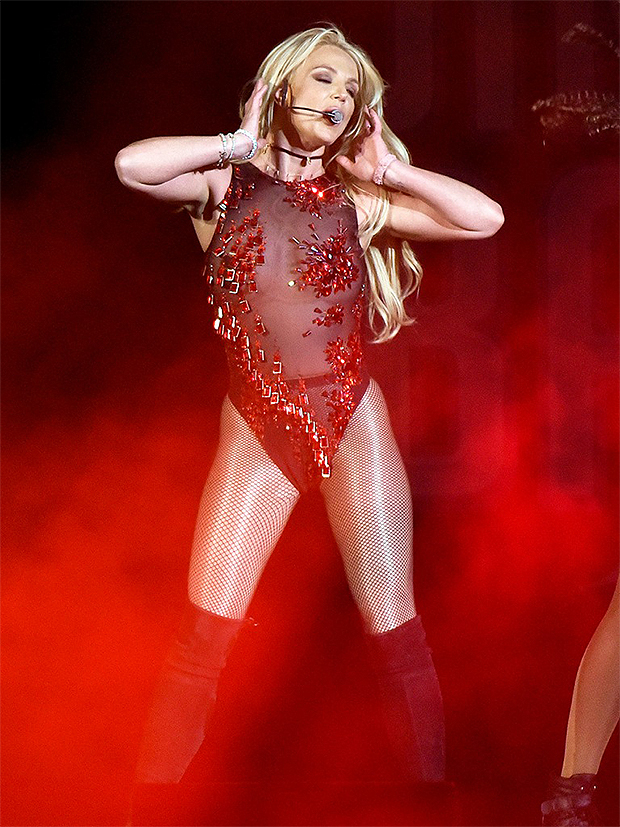 Britney Spears Over The Years: Photos Of Her Transformation

Britney looks happier than ever as she nears the one-month anniversary of her conservatorship ending, which lasted for 13 years. She celebrated with a milestone 40th birthday trip to Cabo San Lucas, Mexico with fiancé Sam Asghari, 28, marking her first vacation as a free woman. Now that her conservatorship is abolished of both her estate and person, the pop star can take control of her business assets and career, as well as her personal health. While has yet to announce a wedding date, fans are eagerly awaiting Brit to tie the knot with Sam, who she’s been dating since 2016.