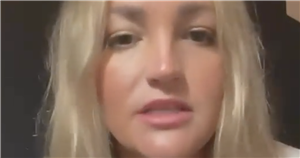 Britney Spears' sister Jamie Lynn has spoken out on the Oops! I Did It Again hitmaker's conservatorship battle.

The 30 year old took to her Instagram stories to share a series of clips of herself as she told her 2.2million followers that she didn't feel it was appropriate to speak out until Britney had her say in court.

The famed singer appeared in a Los Angeles court via video link on last week, where she detailed the extent of her conservatorship, telling the judge: "I'm not here to be anyone's slave."

Styling her blonde mane down, the Jamie Lynn told the public: "The only reason I haven't [spoken] before, is because I felt that until my sister was able to speak for herself, and say what she felt she needed to say publicly, that it wasn't my place. And it wasn't the right thing to do.

"But now that she's very clearly spoken, and said what she needed to say, I feel like I can follow her lead and say what I feel like I need to say – I feel like it's extremely clear that since the day I was born I've only loved, adored, and supported my sister. I mean this is my freaking big sister, before any of this bulls**t.

"I don't care if she wants to run away to a rainforest and have zillion babies in the middle of nowhere, or if she wants to come back and dominate the world the way she is so many times before, because I have nothing to gain or lose either way.

"This situation does not affect me either way, because I'm only her sister who's only concerned about her happiness."

The Zoey 101 star went on to explain that she made a very "conscious" decision to be involved in Britney's life as her sister.

She explained: "Maybe I didn't support the way the public would like me to with a hashtag on a public platform but I can assure you that I've supported my sister long before there was a hashtag and I'll support her long after. That's a fact."

The actress then insisted she's been supporting herself since before she was a teenager.

"I've worked since I was nine years old, I've paid bills since I was 10 years old. Not that I owe the public anything, because my sister knows I love and support her. That's the only person I owe anything to.

"I'm not my family. I am my own person. I'm speaking for myself."

Jamie Lynn continued: "I'm so proud of her for requesting new counsel like I told her many years ago – oh, not in a public platform but just in a personal conversation between two sisters."

She added: "If ending the conservatorship and flying to Mars or whatever the hell else she wants to do to be happy, I support that 100 per cent because I support my sister; I love my sister. Always have, always will. As long as she's happy. So let's keep praying. That's all."

Check out all the latest hot topics on OK! magazine’s news section and discover exclusive celebrity news about your favourite soap actors and reality stars.

We're also on Facebook.com/okmagazineuk – for the latest online celebrity news, features, galleries and videos throughout the day from your favourite site.