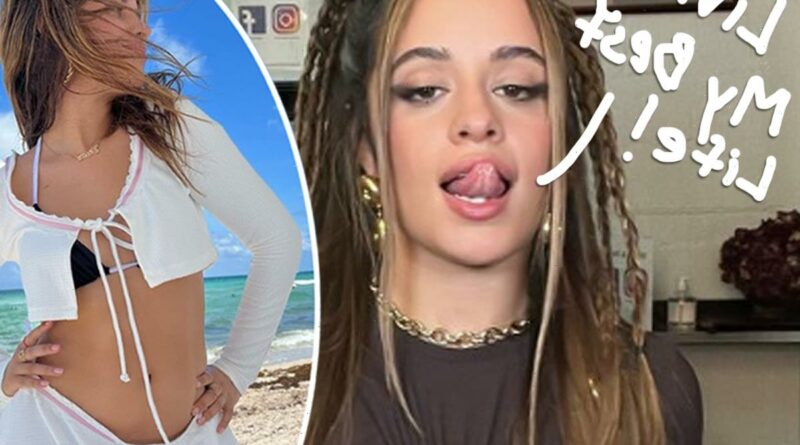 Camila Cabello isn’t looking for a relationship right now? Could have fooled us…

The singer explained in an interview with Cosmopolitan UK published Thursday that she isn’t putting “any pressure” on finding her next love. This is a change for the 25-year-old who explained that her previous mentality was more relationship-focused:

Good for you, girl!

This major mentality shift comes in the wake of her seismic split from ex Shawn Mendes back in November after two years of dating. We really thought those two might go the distance, so it’s not surprising Camila is taking a break to recharge!

Prior to Shawn, Camila was in a relationship with dating coach and writer Matthew Hussey from 2018-2019. Going way back to her Fifth Harmony days, Camila also dated Austin Mahone in 2014, who she once revealed was her “first kiss” and “first love.” Must feel like a lifetime ago now!

So what’s going on lately? Well, in the great Shawn rebound, the Havana singer recently sparked romance rumors with app founder (some say Shawn look-alike?) Austin Kevitch. Austin created a Jewish dating app called Lox Club. Huh. Another dating expert? Wild. The pair were spotted together on a moonlit stroll laughing and smiling. The whole thing looked VERY couple-y — but maybe this was just part of the “good time” she’s trying to have? Either way, nice choice because he’s a hunk!

Camila added that it’s not all about romance though:

“I just want to live my life and have great friendships. If something comes out of that’s something more, then that’s great.”

We can probably all agree that that’s a good way to go about forging new relationships! If she were to get into another relationship, Austin isn’t such a bad pick. But we can see how she wouldn’t want to rush into anything after Shawn!

The young star also touched briefly on feeling vulnerable in her relationships, which she claims to no longer worry about as much as she used to, explaining:

“It’s like if you tell a guy that you like him, the minute he leaves, you’re like, ‘Oh my god, why did I say that? That was so stupid.’”

We’ve probably all been there… Word Vomit, as Lindsay Lohan put it in Mean Girls, LOLz.

Related: 13 Going On 30 Star Christa Allen Is Having A Major Hot Girl Summer!

Camila said she has a feeling like a “vulnerability hangover” after expressing herself so much in a relationship — and explained that because of this vulnerability, “the people you have around you are so important.” Agreed! Above all it’s important to protect your energy! But that won’t stop Camila from being vulnerable in the future, as she added:

“Every single time I’ve been vulnerable, someone has said, “That’s not weird, that’s totally normal.”

Sometimes our minds can be our own worst enemies, so good on Camila for taking time to work on herself before jumping ship to her next relationship. But we’ll still be keeping an eye out for updates with Austin! To read more about Camila’s love life and mental health struggles, click HERE!