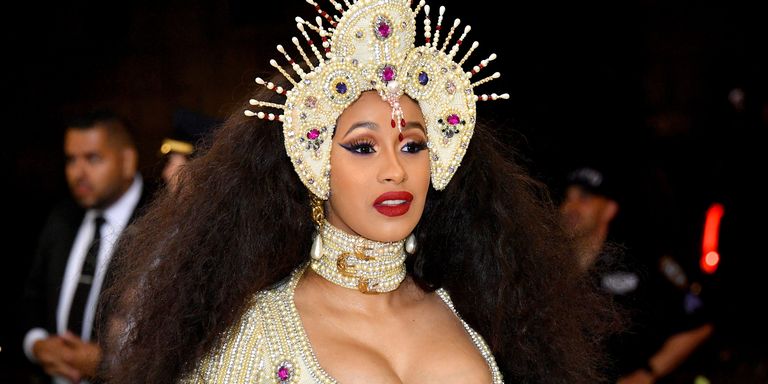 Cardi B teased the sex of her upcoming child during an interview with The New York Times ahead of the Met Gala Monday night. The rapper, who is seven months pregnant, referred to her baby as “she” while speaking to the paper.

So that definitely means she’s having a girl, right?

Cardi B and fiancé Offset first announced they were expecting in early April, after she debuted her baby bump on Saturday Night Live. Shortly after, clues were already starting to drop, hinting that the rapper duo is having a girl.

Cardi’s younger sister, Hennessy Carolina, dropped a similar clue while congratulating her sibling on Instagram. She reportedly wrote in the caption: “I’m going to be able to hold ur baby and give her all the kisses and hugs.” But then she changed “her” to “the baby,” sparking suspicion among curious fans, Us Weekly reports.

A baby is truly a blessing from god I know how much you always wanted to be a mom! You always been Like a second mom to me so I know u gonna be the best mommy everrrr. you took care of me like i was ur own daughter I know how much you LOVE babies. Growing up, you would always break me off a piece of your plate without me asking… to our little brother you give him whatever he imagines …. every time I use to see your adorable baby pictures , I use to wish I was older than you just so I wouldve gotten the chance to carry you and give you kisses when you were a baby because you were so cute and adorable! and NOW that ur baby is coming its like it’s coming true! I’m going to be able to hold ur baby and give the baby all the kisses and hugs! your pregnancy is mines we pregnant can’t believe we’re having a baby! hehehehe and to my brother @offsetyrn @iamcardib Auntie hennny aowwwww ??‍♀️

In addition to dropping possible baby news, Cardi confirmed her status as a rising fashion star at Monday night’s Met Gala (her first one ever). She arrived in a religious-meets-regal beaded ensemble by Moschino, and like a true fashion maven, she was accompanied by the designer behind her look, Jeremy Scott, who matched in his own pearly suit.

She even made sure her future baby got a moment in the spotlight, too.

I want ya to see the details @itsjeremyscott was very detailed !!!

Check out more of Cardi’s best mom-to-be style below.