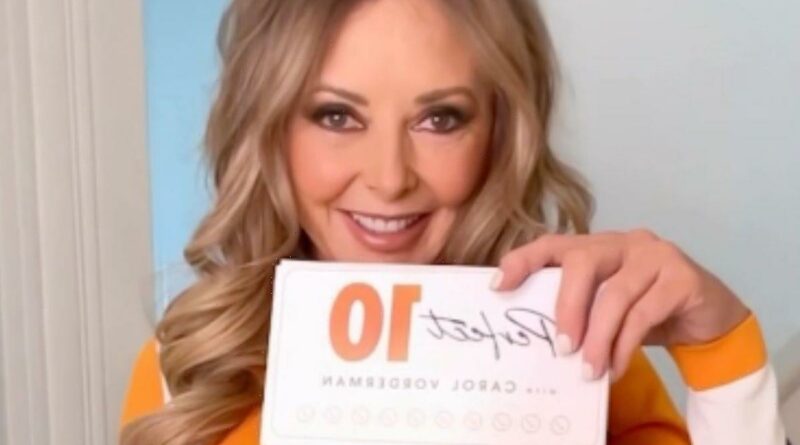 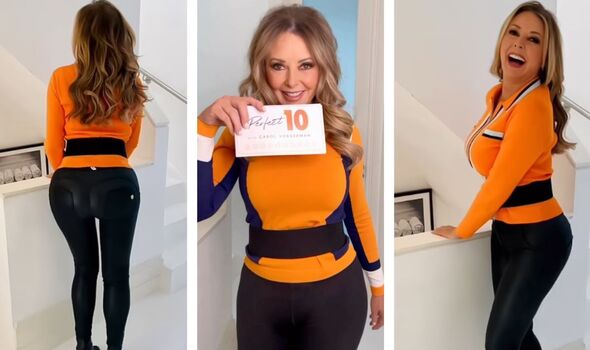 The age-defying beauty had all eyes on her as she shook her derriere and urged fans to check out her new podcast, or watch the material on Youtube.

Carol Vorderman, whose Perfect 10 podcast premieres today, stirred up some enthusiasm among followers as she made an appearance in a pair of tight black leather leggings and a neon orange Karen Millen top.

Once the highest paid woman on British television, the 62-year-old ex-Countdown star is now launching a new quiz show – and her accompanying video to promote it sent her followers into a frenzy.

“Wiggling with joy for @perfect10carol,” she exclaimed in view of her 290,000 followers, as the presenter shook her bottom for the camera wearing very tight jeans, giving fans an eyeful of her famous curves.

“10 questions, 10 answers, all done in 10 minutes. Join me with a different quiz every day Monday To Friday,” she continued in the caption.

Urging followers to give it a try during their coffee breaks or morning commutes, she challenged them to try their best to achieve a “perfect 10” – exactly the score her devotees had for her after watching her latest clip.

Rachel Riley is now in the presenting slot that Carol once occupied, back when she was said to be the highest earning female on television.

Carol Vorderman wore a sensational outfit for the occasion

The quiz show host shared that followers could purchase her bright orange top from Karen Millen. She also divulged that her leather leggings were purchased from @freddystoreofficial, and the belt that cinched in her slim waist is from Amazon.

Carol Vorderman promised followers would find her show, which is delivered in a series of ten-minute installments, “funny, irritating and entertaining” in equal measures, but concluded that she loves it – and “genuinely thinks that you will too”.

Carol Vorderman also made a recent appearance on ITV’s This Morning, when she dissolved into fits of laughter over Prince Harry’s new book and his revelation that he had lost his virginity to an older woman in a field, who humiliated him by treating him like a “stallion”.

Carol Vorderman and Gyles Brandreth, whom she jokingly described as a “stallion” in a reference to Prince Harry, discussed the new book Spare, while the pair were joined by hosts Dermot O’Leary and Alison Hammond. She admitted: “Sometimes Gyles and I get carried away laughing!”