She’s got jokes! Carrie Underwood didn’t miss a beat when it came to teasing her NHL star husband Mike Fisher following his hockey team’s loss on Thursday, May 10.

The 35-year-old country crooner took to Instagram on Friday, May 11, just one day after Fisher’s Nashville Predators were defeated 5 to 1 by the Winnepeg Jets, ending their 2018 Stanley Cup playoff run, to have a little fun.

“Saving $$$ on grooming now that he’s out of a job …” Underwood captioned a picture of their son, Isaiah, and Fischer, 37, which shows the 3-year-old shaving off the athlete’s playoff beard with guarded clippers. 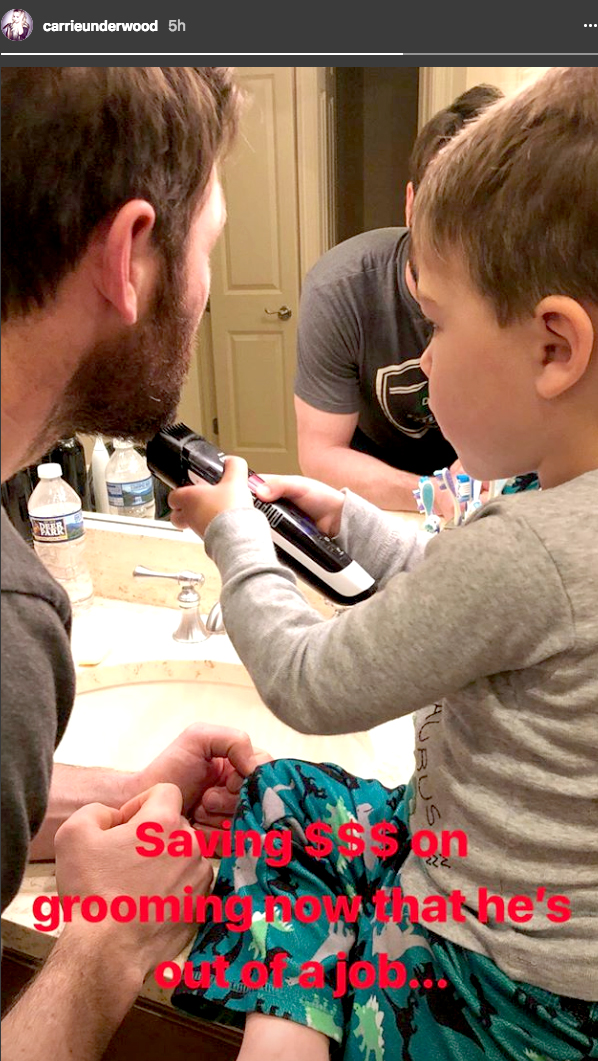 Underwood also took to Twitter on Thursday night to express her feelings on the season. “Welp, to me & our 3 year-old, @mikefisher1212 is the greatest hockey player alive & the @PredsNHL are now & forever the greatest hockey team in NHL history!” she tweeted. “Not the ending we wanted, but we’re alive & well & I get my hubby back, so I say God is good!”

Earlier this playoff season, the American Idol alum — who suffered a devastating fall last November that led to multiple injuries including more than 40 stitches to her face — took to the ice in support of Fisher by leading the Bridgestone Arena in a powerful rendition of the National Anthem prior to Game 2.

Though Fisher finished the season with the team, he had previously announced his retirement in July 2017, but it didn’t last long — in January 2018 it was announced that he’d be returning to the ice for another run.

“SEE YOU AGAIN. Mike Fisher is ending his retirement and will play for the #Preds this season,” the team tweeted at the time.

Underwood was just as amped as fans to see him play again. “Carrie asked me every day what I was going to do and she was excited for me to come back,” he explained in a press conference in January. “I had the blessing of the family, so felt good about that.”