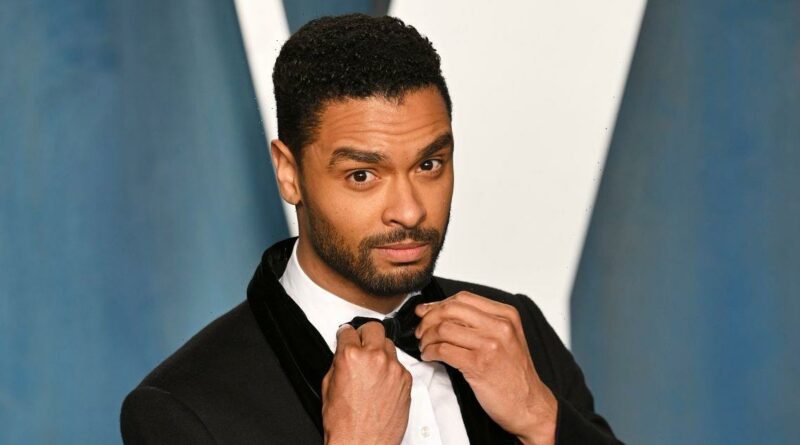 It turns out celebrities love to get involved with their favourite franchises as much as fans do, and that's lead to many major cameos in hit films and TV shows.

As Ben Shephard dropped the bombshell that he appeared in a Harry Potter movie on Good Morning Britain,OK! started to wonder what other famous faces have slipped into the background of iconic films or TV series.

From Bridgerton to Bond, these actors and prominent members of the Royal Family are the last person you would expect to put in the background of a scene, but here's the one's we've spotted over the years…

That's right, the Duke himself appeared in a Harry Potter movie. In the ‘blink and you’ll miss it’ moment, Regé-Jean plays an uncredited role at Bill and Fleur’s wedding in Harry Potter and The Deathly Hallows Part 1.

He stands next to Hermione (Emma Watson) and Molly Weasley (Julie Walters) as they hear a message from the ministry that the Death Eaters have found them.

Regé-Jean has been thrown into the spotlight in recent years as he played Simon on the first season of the hit Netflix series, Bridgerton and has been sorely missed by fans throughout the second season.

Taylor Swift has acted in numerous TV shows, but she made a famous cameo in the FOX TV series, New Girl. The singer popped up in the season two finale at Cece’s wedding with Shivrang and played his former flame, Elaine.

The episode titled ‘Elaine’s Big Day’ saw Taylor declare her love for the groom after the wedding was called off and the duo ran off together.

The Grammy-award winning artist has also appeared in Valentine’s Day playing a teenage sweetheart with Taylor Lautner, as well as in Cats and Disney’s Hannah Montana: The Movie.

Several years later, Ben Stiller watched the film and live tweeted his reactions in 2016. The star admitted that he was still in “shock” that David actually agreed to appear in the film. He penned: “Can’t believe David Bowie actually did this. We were all in shock.”

Keith Richards in Pirates of the Caribbean: At World's End

When Johnny Depp landed the Disney role in 2000, he explained that he modelled his character's speech, movements and qualities on the legendary musician.

Therefore, it was perfect casting for Keith to appear as Captain Teague in the third film and the fourth in 2011, Pirates of the Caribbean: On Stranger Tides. For his cameo in the third film, Keith won the Best Celebrity Cameo Award at the 2007 Spike Horror Awards.

Michael Caine has appeared in numerous Christopher Nolan films from the Dark Knight trilogy to Interstellar, but the British icon also appeared in Dunkirk.

One reporter from the NJ.com noticed Michael's voice in an early screening and the director later confirmed it was him. In the beginning of the film, the actor can be heard giving orders over the radio to fighter pilots.

Speaking in response to the journalist's findings, Christopher Nolan said: “Yes, good for you for spotting him. It’s shocking to me that a lot of people haven’t, when he has really one of the most distinctive voices in cinema. I wanted very much to squeeze him in here. It’s a bit of a nod to his character in Battle of Britain." This was a 1969 film about World War II that Michael starred in alongside Laurence Olivier and Christopher Plummer .

Simon Pegg alongside his roles in Star Trek has appeared in Star Wars. The actor looked unrecognisable as his character Unkar Plutt, a boss at a junkyard on the planet Jakku.

Simon was put into an enormous alien suit in the middle of the dessert which he described on Graham Norton as being a very “sweaty” experience.

The Mission Impossible star shared scenes with Daisy Ridley’s Rey as she stole the millennium falcon from him after she traded scraps for a measly amount of food.

Lord of the Rings star, Cate Blanchett is not above the uncredited cameo in movies either. She famously appeared in Hot Fuzz as Simon Pegg’s girlfriend, Janine.

Dressed in a hazmat suit as she examined a crime scene, it would be difficult to spot it was Cate without her accent and piercing eyes (and eye acting) in her goggles.

Though the role is uncredited, it’s definitely her.

Ed Sheeran in (everything)

Ed Sheeran absolutely loves to pop up in his favourite franchises. Ed is probably most well known for appearing in season 7 of Game of Thrones as a Lannister soldier.

Ed serenaded Maisie William's Arya Stark after he met her in the woods on her way to King's Landing.

However, the Shape of You singer has also appeared in blockbusters such as Netflix’s Red Notice, Star Wars, as well as the romantic comedy, Bridget Jones Baby and Australian soap, Home and Away.

Before he became President of the United States, Joe Biden made an appearance on Parks and Recreation.

The politician starred in two episodes of the show in Season 5, when Ben (Adam Scott) surprised his partner Leslie Knope (Amy Poehler) with a chance to meet Biden as an engagement present.

The sweet moment is a career highlight for Leslie and her overjoyed reaction quickly became a meme and resurfaced when he became President.

Ant and Dec in Love Actually

One of the most memorable cameos is the very young-looking Ant and Dec in Love Actually.

The duo appear as themselves in the festive film, as Bill Nighy’s character Billy Mack promotes his Christmas single on their show. The celebrity signs Blue's picture with a profanity, which leads a flustered Ant and Dec to cut to a commercial.

It also includes one of the best lines about the inseparable presenters, as Billy says: "That's right Ant or Dec."

Stay up to date with all the latest on celebrity and TV news by signing up to OK!'s daily celebrity newsletter.