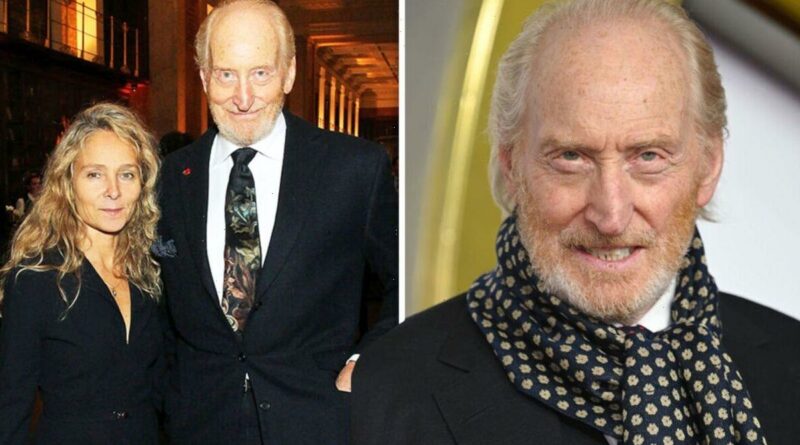 Game of Thrones: Charles Dance was ‘confused’ by final series

Charles Dance, 76, revealed he is in love again almost 20 years after his marriage split with his former wife Joanna Haythorn. The Game of Thrones actor has spoken candidly about his relationship with Alessandra Masi – who is 20 years his junior.

The Tywin Lannister actor shot The Book of Vision – a psychological drama – five years ago but due to Covid in 2020, the release date was delayed.

The Crown actor, who has been dating Italian actress Alessandra Masi for three years, credited his recent film allowing him to meet his now girlfriend.

Speaking in a new interview, the English star admitted his partner is his main memory about shooting the film as he gushed over Alessandra.

“To be honest, it’s meeting Alessandra,” he explained.

Asked whether the film pales in comparison, the on-screen star shared: “Well, it does a bit. Alessandra’s fantastic. I’m very, very lucky.”

The filmstar recalled filming scenes in his girlfriend’s native Italy, where “it was f***ing cold, if I remember rightly,” said The Book of Vision star to The Times.

“In Italy, because of their aesthetic sense, even if the film’s shit it’s going to look good.”

The couple met in 2018 when he acted in the art movie The Book Of Vision, which opened at the Venice film festival in 2020.

Alessandra was the unit production manager and the film was principally shot in Italy.

Charles – who starred as Tywin Lannister in the hit HBO show – was married to Joanna Haythorn from 1970 to 2004, and they have two grown-up children.

He moved to London following his divorce and the sale of his home in Somerset.

Speaking after his divorce, he said: “I feel 35. I probably behave 25. It’s certainly been a period of change for me.

“But my wife was hugely supportive of my career – was, has been and I’m sure will continue to be so.”

Despite welcoming baby daughter Rose together in 2012 and even getting engaged, the couple split months later.