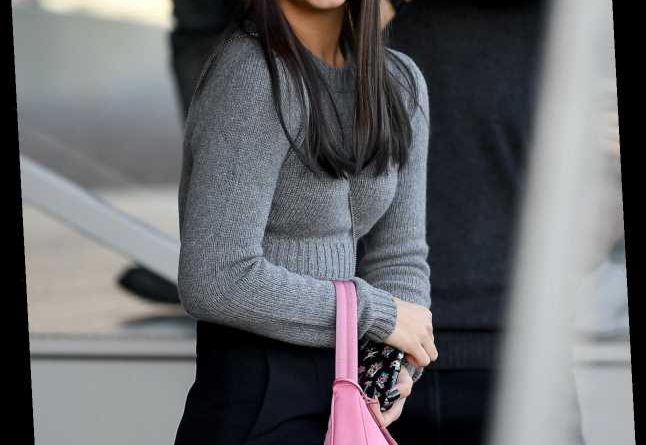 Who knew lovable plush toys could cause so much internet drama? Charli D’Amelio’s Squishmallow collection Instagram has fans pissed right now, and it left her influencer friends kind of shocked, too. The TikTok sensation has almost too many Squishmallows to count, and some aren’t sure whether it’s a feat worthy of bragging rights or just extra behavior on the celeb’s part.

Squishmallow toys are super popular on TikTok, and now that Charli posted about her own massive collection of them, they’re bound to get a whole lot more popular. On Feb. 1, the 16-year-old posted photos to her Instagram posing with her arms outstretched to cuddle all of her adorable Squishmallow plushes. She doesn’t look too happy in the first picture, though, and that’s probably because she wants to get sponsored by the children’s toy brand. Her caption wasn’t shy about her motivation behind the post, either: "#squishmallowspleasesponserme."

The subsequent pictures in Charli’s slideshow show her smiling alongside all of her adorable stuffed animals, but who wouldn’t grin in a king-sized bed full of those cute Squishmallows? Several of the influencer’s friends commented on the post. They all expressed their shock at the number of plushes Charli owned. "When u told me u ordered a few I thought u meant like 5," fellow TikToker Madi Monroe commented. Charli unapologetically replied to her, simply writing, "Oops."

Well, "oops" implies ordering such a large quantity of Squishmallows was somehow an accident, but Charli’s collection was definitely not assembled mistakenly.

Unfortunately, fans weren’t too happy with the post featuring all of Charli’s toys and they flooded her comments with upset replies. Most were angry that her photos would cause a surge in Squishmallow demand, and thus, prices, due to her large following across social media. Some owners of the toys might be pleased with an uptick in interest surrounding the brand of stuffed animals, since the value of their collection would surely go up, but others aren’t too hopeful.

"If y’all thought it was hard to find them before, now we are really screwed," one account commented on her photo. "Well the squish community is gonna explode in […] seconds," another user wrote.

There were certainly no immediate signs Charli’s massive collection caused a surge in pricing or demand for the toys, but her post already has over 3.7 million likes on Instagram. At the end of the day, the toys were already super popular online, so one mega influencer’s post likely won’t be the tipping point for your local supplier to end up out-of-stock. I mean, they probably already are out-of-stock.