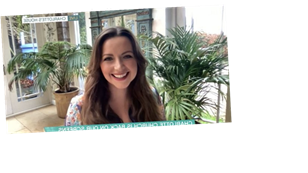 Charlotte Church confirmed she had given birth to her third child in February, it has come to light after This Morning viewers accused Holly Willoughby of "slipping up" live on air.

The 34 year old was already mum to daughter Ruby, 12, and Dexter, 11, who she shares with ex-fiancé Gavin Henson.

She announced she was pregnant with her third child — and first with husband Jonathan Powell — last March, but fans seemingly missed the announcement that she had given birth.

Opera singer turned pop star Charlotte appeared on Wednesday's episode of the hit ITV daytime show This Morning when she was quizzed on homeschooling during the pandemic.

But fans mistakenly thought Holly had slipped up during the interview, as she chimed: "You've got three kids now! How is homeschooling?," when speaking to the singer.

Charlotte brushed off Holly's claim and simply responded: "I've been homeschooling my own children for a few years now."

As speculation about her giving birth mounted on Wednesday evening, footage of Charlotte introducing her newborn emerged online.

The Crazy Chick hitmaker joined drag collective Sink The Pink on their Pop Tarts series back in February, where she proudly showed off her bundle of joy.

As she joined host TeTe Bang on the show, Charlotte said: "I would love to introduce you to my little baby," before disappearing to get her.

Charlotte returned to the screen holding up her gorgeous baby girl, who was dressed in a fluffy pink romper suit.

TeTe said: "Oh my gosh, it's so small!," as Charlotte laughed before planting a kiss on her newborn's cheek and joking: "Covid realness, honey."

The "Voice of an Angel" announced she was pregnant at the beginning of the pandemic when she pulled out of a charity performance last March.

After seeing clips of the gig, which raised money for flood victims in Wales, she tweeted: "Gutted to have missed it.

"I'm preggers so I'm airing on the side of caution in terms of virus. It looks like it was a great success."

Charlotte started dating her husband Jonathan in 2010 before they married seven years later in a secret ceremony.

The pair wed at a registry office in Cardiff in front of just a handful of guests.