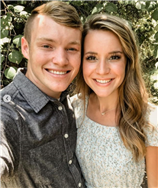 It’s been less than six months since Justin Duggar and Claire Spivey got married, but it seems that the very young couple might already be ready to participate in the most sacred Duggar tradition of them all:

Yes, in the Duggar family, it’s not enough to simply have kids — you have to have the most kids.

And that means starting young.

Which is why Justin and Claire are joining the race before either of them is even old enough to buy a drink at a bar.

(Obviously, they would be banished by their fellow cultists if either of them ever entered a bar or bought a drink, but you get our point.)

This couple is young even by the standards of a family that regularly marries off teenagers.

But fans are convinced that has been hinting that there’s a baby on the way.

The speculation began on Father’s Day, when Claire posted a photo of herself and Justin.

Nothing out of the ordinary there, but she captioned the pic — with three hearts.

The possible symbolism was not lost on Claire and Justin’s followers, many of whom jumped to the conclusion that Claire is pregnant (or “expecting” to use the only euphemism the Duggars have deemed appropriate).

“The three hearts is a reach,” another chimed in.

“But it does strike me as suspicious that she posted this on Father’s Day instead of some post about Mr. Spivey. Instead, he was just in her story.”

“That’s what I thought too,” a third person added.

“It definitely would be a much bigger stretch if it wasn’t posted on Father’s Day.”

It would also be a bigger stretch if this were any family other than the Duggars.

Claire turned 20 in February, and Justin is still only 18.

The Duggars love to buck trends, especially when it comes to marriage and procreation, but most of Jim Bob’s kids have waited at least until their twenties.

Normally, this matter would be settled within a matter of days, as the Duggars would eagerly announce that their ever-expanding family is soon to get even larger.

But these days, things are different.

Ever since Josh Duggar was arrested on child pornography charges, the entire family has been keeping a much lower profile.

Major family events, such as the marriage of Jed Duggar and Katey Nakatsu are now kept under wraps until after they’ve taken place.

So even if Claire is pregnant, it’s possible that we won’t find out about it until after the baby is born.

It’s certainly true that the couple is very young, and it’s quite a leap to assume that Claire is pregnant based on the caption to her photo.

But it’s also true that Duggar couples commonly start breeding after they’ve been married only a few months.

And Justin and Claire might have faced intense pressure to start a family, as Jim Bob and company would love for any other story to overshadow the Josh scandal.