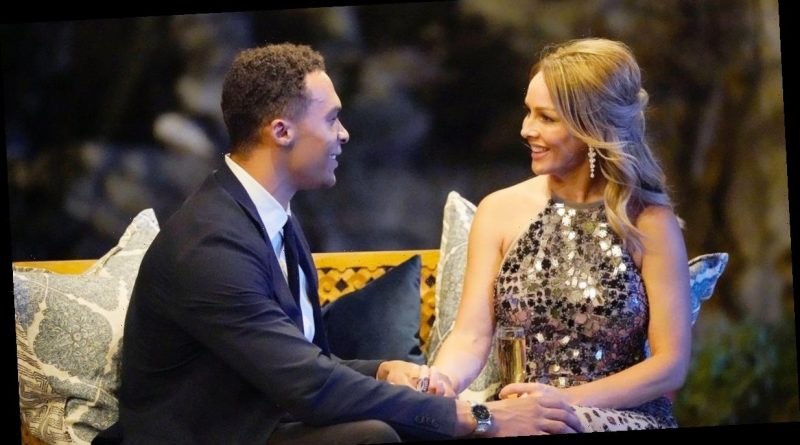 From the moment The Bachelorette Season 16 began filming in July 2020, Clare Crawley and Dale Moss’ relationship timeline has felt as thrilling and unpredictable as a rollercoaster ride, but it seems that ride may be coming to an end. On Jan. 19, E! News claimed Crawley and Moss are reportedly "taking time apart" after "fighting a lot." That same day, Us Weekly claimed the couple is reportedly "on a break" due to "serious issues." Moss then addressed the rumors with an Instagram Story confirming the two decided to go their separate ways. Elite Daily reached out to reps for Crawley and Moss for comment, but didn’t hear back in time for publication.

To say I’m shook would be an understatement. Ever since they finally got to go public with their love story in November, the couple hasn’t been able to stop gushing about each other. Not long after they went public with their engagement, the two even talked about the possibility of starting a family together… like, soon. "I talk about babies all the time, and he’s like, ‘Yeah, that’s what I want,’ and it doesn’t scare him," Crawley told Rachel Lindsay and Becca Kufrin during an appearance on the Bachelor Happy Hour podcast. Though it seems the love story between these two has come to an end, let’s take a moment to review their love story, shall we?

After several delays due to the ongoing coronavirus pandemic, Season 16 of The Bachelorette began filming in July 2020. Less than two weeks later, fans were shocked to learn that Crawley had reportedly already fallen in love with one of her contestants. As a source for Life & Style reportedly claimed on July 30, Crawley "told producers she no longer wanted to participate in the show" because she had "already fallen in love" with Dale Moss.

Not long after breaking the news of Crawley’s reported decision to leave the show, Life & Style had more tea to spill: Reportedly, Crawley and Moss were already engaged. To make things even more sus, Reality Steve reportedly claimed a big fireworks display went down on Aug. 2 at the La Quinta Resort & Spa, which is where The Bachelorette was filming, and it was possibly in celebration of Crawley and Moss’ rumored engagement.

They Went Public With Their Engagement In November 2020

After months of anticipation and rumors, The Bachelorette Season 16 finally premiered on Oct. 13. The chemistry between Crawley and Moss was undeniable from the moment he stepped out of the limo, and exactly no one was surprised when Moss popped the question during the Nov. 5 episode. Soon after the episode dropped, the two took to IG to finally share the exciting news. Then, just four days after the proposal aired, Moss posted a pic of himself with Crawley and his sister, making it clear he and his fiancée were still going strong.

"Everything since the show has been reaffirming of why I chose Dale," Crawley told People that same month. "He’s even better off camera, in person, one on one at home. Dale is the yin to my yang. And this is the happiest I’ve ever been." Moss confirmed he felt the same way when he said, "For me personally, there is no explanation needed. I’ve never been afraid of commitment. And when I met Clare, I knew I was all in. She lights a fire in me that I was missing for so long."

They Sparked Marriage Rumors In December 2020

Throughout November and December, Crawley and Moss continued posted loved-up pics together on Instagram. Some people even suspected the couple was already married after Crawley referred to Moss as her "husband" in a Dec. 10 Instagram Story, but Crawley later denied those rumors, claiming it was just a "slip of the tongue." Later on in the month, the couple rang in 2021 together.

They Were On The Rocks As Of January 2021

Crawley and Moss seemingly started off the new year as strong as ever. During a Jan. 13 episode of Raising the Bar With Alli and Adrian, Moss even revealed he only agreed to appear on The Bachelorette after Crawley was announced as the lead. "Now, I could have never planned what happened because I was nominated," he said. "I never actually signed up. And I turned it down over and over and over again. And I actually finally committed to it four days before everyone was supposed to leave for the show. And the only reason I committed to it was because Clare was announced as Bachelorette at that time."

But fans noticed Moss was posting Instagrams from New York City, while Crawley appears to be in Northern California. On Jan. 19, E! News claimed the two were "taking time apart" after "fighting a lot."

"They are mainly in disagreement over lifestyle preferences," the source reportedly claimed. "Dale wants to be in a lively city and focus on his career, and Clare is rooted in Sacramento to help care for her mom. It’s been very tense recently between them."

While Moss reportedly cares deeply about his fiancée, the source claimed the model "feels like he’s rushing into something he’s unsure about."

"They are both still getting to know each other and figuring it all out," E!’s source reportedly claimed. "They’ve decided to take some time apart for now… They are still figuring out the logistics of their relationship and if they will stay together."

On Jan. 19, another source reportedly told Us Weekly, “Dale and Clare are technically still together but there are serious issues they are working through… They’re in communication but on a break.”

Moss confirmed his and Crawley’s breakup on Jan. 19, putting an end to the speculation once and for all. "I wanted share[sic] with you all that Clare and I have decided to go our separate ways. We appreciate the love and support we’ve received from so many people, but this is the healthiest decision for both of us at this time," he wrote on Instagram Stories. "We strongly believe in leading with love and always remaining true to oneself – something our families have taught and instilled in us throughout our lives. We only hope the best things for one another."

Here’s hoping Crawley and Moss both have bright futures ahead of them, even though their plans no longer include each other.