Home » Celebrities » Corey Rathgeber: Yes Evelin Asked Me for a Divorce! But Hear Me Out … 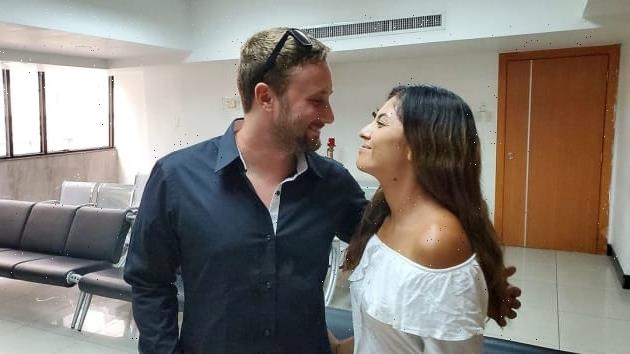 90 Day Fiance: The Other Way is supposed to hold surprises for the viewers at home.

The show is always filmed many months before it airs. The cast should rarely be blindsided by what their loved ones say on screen.

But last week, one star was blindsided. Evelin Villegas lashed out, calling Corey a lying coward.

She revealed that she’d asked him for a divorce. Corey has issued a response.

They had both of course known that they were secretly married, which was supposed to be their big reveal this season.

What only one of them knew was how far things had gone with Jenny from Peru.

Corey had told Evelin that he and Jenny were just a short fling.

In fact, he claimed to her that they’d tried to have sex but that he didn’t become erect.

Evelin was mad enough at him for that. The truth hurt more.

Evelin saw alongside the rest of us when Corey confessed how serious things got with Jenny.

She introduced him to her family, even though it couldn’t have been more than a few weeks after they met.

They were also making plans to move in together.

The first huge issue with this is that Corey was already married during all of this, and had been married for at least half a year.

He and Evelin may have been “on a break,” but married and spending time apart is not the same thing at all.

The second major issue, Corey revealed, is that he didn’t actually dump Jenny … not officially.

Once on lockdown with Evelin, he just … stopped responding to Jenny.

Things were good with Evelin, so he ghosted the girl he’d been talking to about moving in together.

When Evelin responded to all of this, she was devastated, calling Corey a liar and a coward on social media.

She revealed that Corey couldn’t have believed that they were “done” in Peru, because she’d asked him for a divorce and he’d refused to give her one.

After taking a few days to sort through his thoughts, Corey took to his own Instagram to make his own statement.

“Evelin made a statement a few days ago and I thought I would wait to make a response… ” he began.

Corey continued: “Here is my response: Being in a long distance relationship is not easy.”

“Being in a long distance relationship from 2 different countries isn’t easy,” Corey wrote.

“Being on national and international TV for the world to judge that relationship isn’t any easier,” he added.

“I have to say given all that me and Evelin have been through,” Corey noted, “it definitely shows just how strong that relationship has been!”

“7 years is a long time,” Corey remarked. “I wouldn’t trade it for anything.”

He affirmed: “I love and have always loved Evelin sincerely.”

Corey confessed: “I never knew that one could feel so strong for another.”

“I have made mistakes that I wish I could take back,” Corey admitted.

“I will work to be the best version of me possible,” he vowed.

“And,” Corey continued, he will work to “use those mistakes to become better!”

“Evelin I am sorry for the stress I have put you through,” Corey wrote, addressing his wife.

“You have all rights to be upset with me,” he stressed. “I don’t blame you for expressing those feelings.”

Corey concluded: “I want you to know that you are the world’s most beautiful girl! I love you with all my heart please never forget that.”