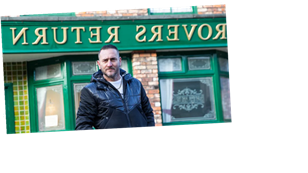 Will Mellor has opened up about how landing his new role in Coronation Street gave him and his entire family “a real boost” after tragically losing his dad last April.

The actor, 44, was left heartbroken after his dad Bill passed away. Unable to hug his father due to the Covid-19 restrictions it was – as Will puts it – “a tough year.”

In an interview about his new role as Coronation Street’s new baddie – evil drug lord, Harvey – Will revealed just how much the part means to him.

“We've all had a really tough year with losing my father last year,” said Will, talking about his family. “This has been a real boost for us this year. You know, a bit of fun for us to look forward to,” he explained. “We're all very happy.”

Will hails from Bradbury in Greater Manchester, so a spot on the cobbles is something he’s always dreamed about. Despite being an obvious choice for the show, Will confirmed that this was the first time he’d been asked to do it.

“I always said if they come knocking I'll do it, because this is something that I've grown up with being a Manchester actor,” he explained. “I used to joke about it saying I must be the only northern actor who's not been asked to do it.”

He also told of how his mum has wanted him to be in the soap since he was just 12 years old.

“It was a comment she made when I first got with an agent in Manchester when I was 12,” Will recalled. “From the moment I got into the agency she said, ‘I’d just love him to get on Corrie.’

“So she's actually waited 32 years and finally her son is on Coronation Street, not playing the nicest character, but she's over the moon – she really is,” he gushed.

When it comes to Will’s character, Harvey, the actor said that he’s a “different kind” of baddie.

“This is a seasoned baddie who people can recognise,” says Will. “He's a street guy who's turning vulnerable people into drug dealers because they're not on the police radar. It's the lowest of the low.”

Since Corrie has such a dedicated fan base, it’s no surprise that Will is feeling slightly nervous about how he’ll be received.

“When I started I was thinking, ‘Am I going to get hassled in the street? Are people gonna shout abuse at me?’ I just hope the fans understand it’s not real!”