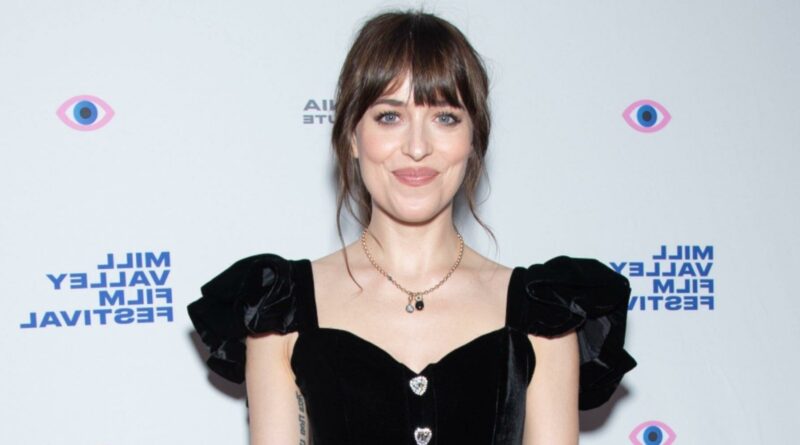 On Saturday, the actress attended a screening of The Lost Daughter at the Mill Valley Film Festival in San Rafael and showed out in a long black velvet A-line Alessandra Rich gown. The fitted ankle-length dress was adorned with rhinestone heart mock-buttons and had ruffled statement straps. She accessorized with classic black pointy-toed pumps and a gold chain necklace with a black stone and diamond charms. For her naturally glowing glam, the Fifty Shades of Grey star rocked her signature fringe and a messy ponytail which left out some face-framing tresses. Thick lashes framed her eyes while and she opted for a peachy eyeshadow and a complementary lip.

During the red carpet call, Johnson posed alongside director Maggie Gyllenhaal, who acquired the rights to the 2006 novel of the same name by Elena Ferrante. The film, which marks Gyllenhaal's directorial debut, premiered at the Venice International Film Festival to rave reviews, and Gyllenhaal even won the Golden Osella Award for Best Screenplay.

The star-studded cast, which also includes Olivia Colman and Jessie Buckley, began shooting last fall. The movie will hit select theaters and be available for streaming on Netflix on Dec. 31.