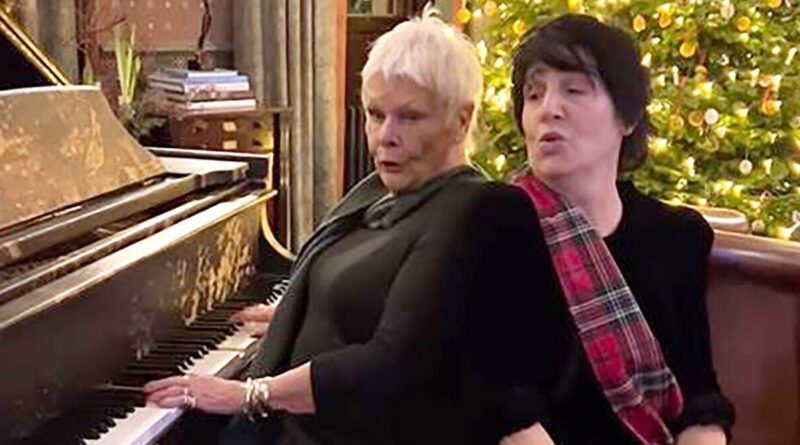 Judi Dench duets to ABBA with Sharleen Spiteri on the piano

Dame Judi Dench, 88, left hotel guests stunned after she was seen giving a musical performance on New Year’s Eve just before midnight fireworks at a hotel in Aberdeenshire. The Hollywood star joined in on singing parts of Abba’s hit Waterloo, as she was joined by Sharleen Spiteri, 55, who belted out the main vocals.

Scottish singer and guitarist Sharleen is best known for being the lead singer of the rock band Texas.

A video of their joint performance posted to Twitter has now amassed over 100,000 views.

The clip shows the pair sharing a stool, with Dame Judi playing the piano while Sharleen sings.

The incredible event took place at The Fife Arms in Braemar, Aberdeenshire, just before hotel guests welcomed in 2023.

Onlookers appeared to be delighted by the unexpected occurrence, while others took to Twitter to share their amazement.

“Judi Dench and Sharleen Spiteri were staying at the hotel and we had an impromptu moment at the piano,” he said.

“It was a happy evening with lots of guests and locals clapping.”

He later told the PA news agency: “(Judi and Sharleen) had met previously but after dinner they met in the lobby and took to the piano.

“Guests were somewhat shocked but loved it!” he continued.

“Two legends – a Scottish musician, Sharleen Spiteri – and Dame Judi who, although born in the city of York, is an honorary Scot for not least playing Queen Victoria on so many occasions.

“Mrs Brown was back on Royal Deeside!” he added.

The icon was appearing on the Graham Norton Show, while Ben was hosting GMB, which is filmed in the same studios.

“The Friday morning I went in and there was a Dame Judi Dench picture on my desk in my dressing room,” he told Gaby Roslin on her podcast a few weeks ago.

“She had found out that she was in my dressing room and she signed a picture, a Dame Judi Dench picture.

“It said: ‘Dear Ben, thank you for letting me have your dressing room, just to say we absolutely love Tipping Point’. And left it right there.

“I was like, is this a joke? Why have I got a signed Dame Judi Dench picture?” he continued.

Ben gushed over the sweet gesture saying it was a “really lovely thing” that she “didn’t have to do”.

He also heartwarmingly branded the moment “the most wonderful experience I had”.