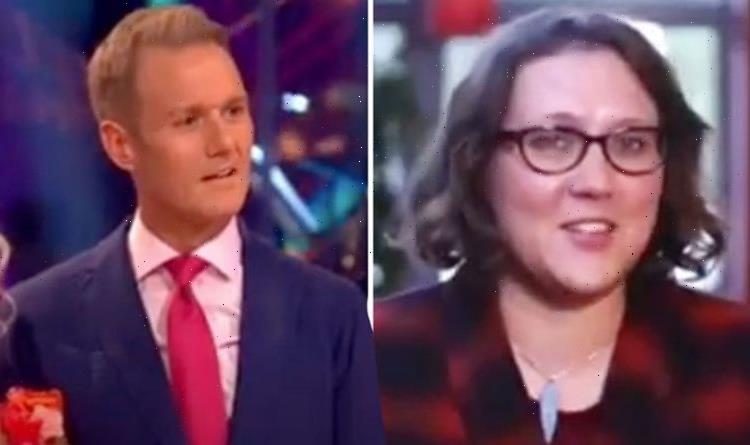 Last month, Dan Walker paid a moving tribute to his rarely seen wife Sarah on Strictly Come Dancing 2021 with his dance partner Nadia Bychkova. His spouse looked on from the audience as the duo performed a Viennese Waltz to her favourite song Billy Joel’s She’s Always a Woman.

After the routine, Sarah gave the pair a standing ovation.

In Claudia Winkleman’s corner, the 44-year-old thanked his wife for her support and for allowing him to take part in the show.

He began by saying: “I’m going to gush over her for a moment, because she’s one of those people the more you know her the more you love her.

“I’ve known her and loved her for over half of my life.

“She’s absolutely amazing. She’s such a special person I absolutely love her to bits and I just hope she enjoyed that.”

Last week, he praised his wife for looking after their kids Susanna, Jessica and Joe and for doing all the work such as taking the bins out while he trains for the show.

He said: “I’ve got so much making up to do, I’ve got to take the bins out forever I think.

“I promise a lot more as well.”

Dan and Nadiya’s Viennese Waltz earned them a respectable 28 out of 40 points from the judges.

Ahead of their performance, the latter and their three children were seen in his VT for the first time publicly.

Dan’s family are usually kept away from the public eye and he doesn’t show their faces on social media.

Last month, comedian Jimmy Carr jokingly quizzed Dan about his marriage while on the BBC show as he quipped about the so-called Strictly curse.

The term has been used to describe relationship break-ups involving the contestants or professionals in Strictly Come Dancing.

Hitting back, Dan replied: “I am fine, I have got no problem with it.”

He added his wife was “having a lovely time” getting to know his dance partner.

The couple, who live in Sheffield, married back in 2001.

Tonight, the presenter and Nadiya will perform a Couple’s Choice routine to MKTO’s Classic.

Strictly Come Dancing returns to BBC One at 6.45pm on BBC One.