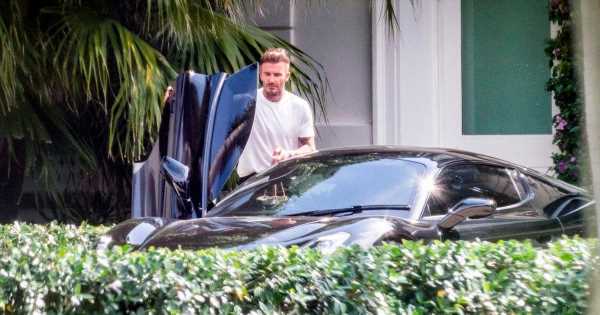 David Beckham was snapped beaming as he stepped foot out of his luxe sports car ahead of his eldest son Brooklyn Beckham's wedding to Nicola Peltz.

The pro footballer seemed in good spirits as he arrived at the Peltz family's £76million lavish estate.

David, 46, donned a simple white tee as closed the high-rise doors on his suave Maserati.

His iconic locks were swept back effortlessly as he looked calm and collective just hours before the couple's rehearsal dinner, which was also held at the Peltz family home.

With his large array of tattoos on show, the father-of-four arrived on set of the stunning Florida estate in time for Friday's wedding dinner.

Just like his father, David and Victoria Beckham's son Romeo, 19, attended the pre-wedding bash aside his beau Mia.

Arriving in style, the teen rocked up in a luxe Maserati, which is worth an estimated £65K.

The stylish black motor was the perfect fit for the lavish event – estimated to have a stunning display of orchard flowers worth a jaw-dropping sum of £50K.

The pre-wedding bash was attended by 300 guests, including several celebrity A-listers, including Wimbledon star Serena Williams, Real Housewives star Eva Longoria, and even David and Victoria's BBFs the Ramsays.

Pro chef Gordon was joined alongside his children and his wife Tana for the event at the stunning estate.

Aside from the star-studded family, David's other list of friends appeared glammed up in an adorable snap ahead of the rehearsals.

They joined celebrity guests at the party of the 44,000-square-foot estate – where the official ceremony will also be held.

Reports previously revealed that Nicola's billionaire father turned down chef Gordon's offering to cater the wedding – choosing his own Miami cooks instead.

Father of the bride and American billionaire businessman Nelson Peltz – who is worth reportedly £1.3 billion – originally brought the property in 2015.

The estate boasts a swimming pool, lavish exterior, and tranquil and vast gardens.

It will provides the ultimate and perfect backdrop for today's official wedding ceremony.

Final touches and preparation are currently being made to ensure every detail is perfect ahead of the biggest wedding of the year.

The tranquil gardens feature stunning marquees surrounded by an abundance of palm trees.

Sitting right on the beachfront, the marquees are positioned to the side of the home, which is called Montsorrel.

For more showbiz updates – and all the latest on the Beckham wedding! – sign up for OK! 's daily newsletter here.