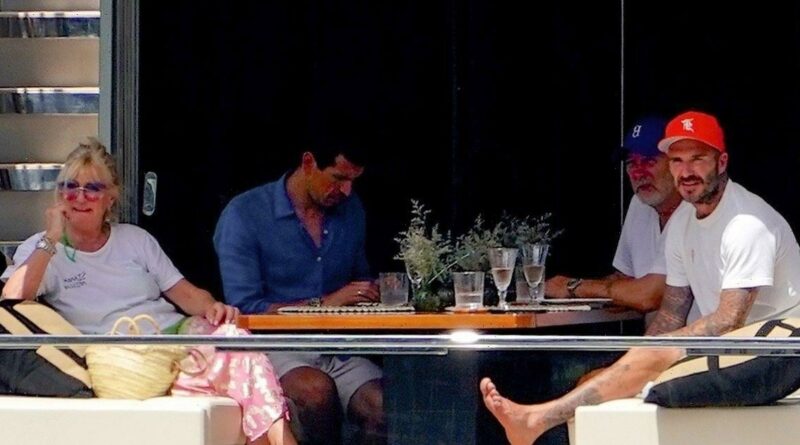 David Beckham was spotted relaxing with friends on his super yacht in Miami, Florida, days ahead of son Brooklyn Beckham’s wedding to Nicola Peltz.

The eldest son of David and his wife Victoria Beckham is due to get married on Saturday in front of an array of celebrity guests as well as close friends and family, and preparations are well under way.

Father of the groom-to-be David hasn't appeared stressed in the lead up to his son’s big day though, as he was seen sitting atop his luxury yacht named Seven, which is the middle name of his daughter Harper Beckham.

The 46 year old enjoyed a meal and a glass of wine with a group of friends and kept his ensemble causal in a white T-shirt and a pair of shorts, topped off with a red cap.

The number seven has a huge significance for David. As well as being the middle name of his only daughter, it was also the shirt number he famously wore for six years as a football player for Manchester United and internationally, for the England team.

Towering at 93.5ft, the Beckhams' super yacht holds accommodation for up to 10 guests in five staterooms and boasts a beach deck, an extended swim platform as well as a four-member crew serving the Beckhams family on board.

The Seven yacht is also built with two engines that each generate 2,400 horsepower and has a cruise speed ranging between 20 to 30 knots with the ability to travel 300 nautical miles without needing to refuel.

David’s appearance on the yacht comes as extended members of the Beckham family arrived with the ex-football star, wife Victoria and children Harper, Romeo and Cruz Beckham, in Palm Beach, Florida, to attend Brooklyn’s wedding to Nicola on Saturday.

Family members that have been spotted in the sunshine state this week have included Victoria’s younger sister, Louise Adams, and her kids, including Tallulah-May Flood. Victoria's mum and dad are also in town, along with David family such as his mum Sandra.

Arrangements have been in full swing for the wedding of the year, as marquees were seen propped up over Nicola’s sprawling £76 million family estate this week. The oceanside mansion will host the wedding and guards with dogs have also been spotted patrolling the grounds.

British Vogue are set to publish pictures from inside the big day and ahead of the occasion, Brooklyn and Nicola took part in a Mr And Mrrs video, which saw them discuss their feelings about one particular part of their big day — their First Dance.

While Brooklyn appeared confident ahead of the moment, Nicola didn't feel the same.

“I’m great at dancing, I'm not worried about that,” the upcoming groom said, while bride-to-be Nicola confessed: “I'm terrified about the first dance, I can't dance.”