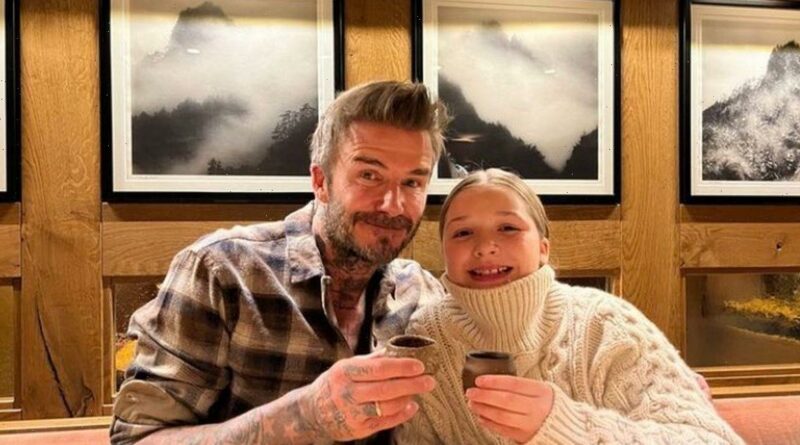 David Beckham has appeared in an adorable video singing happy birthday to his son Cruz.

David, Harper and Cruz could all be seen in the video singing to Dancing Queen, with Cruz swaying around in the background.

David, 46, looked delighted as he beamed at the camera, meanwhile little Harper flashed a smile while wearing a pink jumper.

Birthday boy Cruz could be seen swaying in the background and miming the words.

"Someone’s excited to be turning 17 @cruzbeckham singing into his birthday weekend #HarperSeven," the dad-of-four penned.

Cruz turns 17 on February 20, and he's the youngest of the Beckham boys, with older brothers Romeo and Brooklyn.

The family look to be having a very fun time away for Cruz's birthday, and they've headed skiing.

Former footballer David posed in a pink top and black trousers as he attempted snowboarding in very heavy snow. "I absolutely love our new 2022 kit so much that I wore it snowboarding all week We designed this kit for our fans the real heartbeat of our club Let’s go," David penned.

David has shared a string of images and videos of the kids having an amazing time, including Cruz showing off a jump.

David coined the snow his "happy place," as he filmed while zooming down on his skis.

And after a busy morning, the star tucked into some delicious food including a platter of ham and an Aperol spritz with a funny caption of: "Yep, just one more."

After eating, Cruz enjoyed the snow but wasn't impressed with the early starting according to dad David.

The fireworks in the evening were sure to put a smile on the youngster's face though.

David shared with his legion of followers that Victoria Beckham hasn't joined them on their trip away.

"Miss you mummy," David penned over a photo, adding: "While mummy is hard at work, daddy day care."

In another photo, Harper and dad David posed for a sweet photo, with David writing: "@victoriabeckham we wish u were here. A little sake for daddy & sparkling water for Harper Seven."

The trip comes after David unveiled a sauna in his and Victoria's country estate.

The 46 year old former footballer took to Instagram to post the snap, sharing the steamy picture with his 71.1million followers.

As part of the sprawling estate, reports suggest that David bought a log cabin for the garden that operates as an Estonian sauna.

Inside, the picture shows that the building has a sauna and steam room, allowing the ex Manchester United star to relax and get some well deserved rest.

For all your lifestyle and showbiz news, sign up to OK!'s daily newsletter here